This should be fun!

>I have never in my life watched an episode of Dancing with the Stars. Nothing against it, just I think my TV schedule is full. (yes, it is possible)

Today ABC announced the cast of the next run of Dancing with the Stars. Included on the list is Muhammed Ali’s daughter, Billy Ray Cyrus, Steve “Ian Ziering” Sander and Heather Mills McCartney. That’s right, Paul’s soon to be ex-wife.

Now, the reason I’m making a big deal about this? Heather only has one leg! Well, one REAL leg. There is two ways to look at this. One, Heather has an unfair advantage, she can never be criticized for her legs not making straight lines, which is very important in ball room dancing. Her leg will ALWAYS be straight! This hardly seems fair. 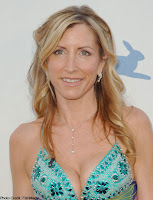 The second way of looking at this is that Heather is at a real dis-advantage. What happens when she has to the twist? Or that russian kick where you have to squat and kick your legs. Obviously she is going to have to “bend” the rules. Ha Ha!