This is going to get me killed…… 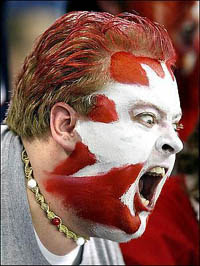 I’ve never really understood sports. It all just seems so weird to me. People getting all padded and suited up to pummel eachother. It’s kinda like going to a bar in the Maritimes, but without the coatcheck, Blue Star or Alpine.

Usually I go through the day to day of not understanding sports in blissful ignorance. I mean sure I still don’t understand why anyone would get up at 5 am to practice diving (isn’t it the same water in the afternoon?), or those twice a day hockey practices (after a certain amount of practice, don’t you just know how to play?) For years when people asked me what my favorite Hockey team was I automatically responded the Mighty Ducks. Why? Because the Maritimes didn’t have a team and because I liked those Disney movies with Emilio Estevez. But on the eve of the Calgary Flames first regular season upon us I was stuck with a nagging question in my head.

Why is everyone so excited? Don’t the Flames suck this year? I mean I’m no expert but we’ve played 7 regular games in the pre-season and we only won 1 in regulation time. That can’t be good can it? We lost 5 games in a row yet everyone is convinced that this is the year for the Flames. If I drove 5 different Saturns and they all broke down, wouldn’t I be fairly pesimistic about trying a Saturn another 100 times? I decided to do a little investigating and started asking hockey fans: “Yo, what is the deal with the Flames this year?”

I couldn’t help but be amused that I received the same answer over and over again. “Man, don’t worry about it, it’s only preseason, they are testing out the new recruits.” Oh, Ok. I guess that makes sense, but, this is where I get a little confused. Aren’t the other teams doing the same thing? Surely we aren’t the only NHL team out there testing our new players and getting a feel for them. If our new players can’t even beat their new players, doesn’t that say something?

But maybe I’ve said too much. Tonight the Flames will face off against the Flyers. Harvey the Hound will still be a little creepy and the 50/50 draw will still be worth more than my annual salary. Thousands of fans will pack the Saddledome and for three hours many fans will watch (and criticize) those doing what they were never good enough to do. Life will go for Flames fans, I just won’t get it.