There’s a new way to explore Banff and it only...

In partnership with Park Canada

For the past couple of years, the small mountain towns near Calgary have been getting busier in busier. Particularly Banff and Lake Louise, which even before this year’s Canada 150 celebrations and free park admission, were seeing record crowds, thanks to years of strong marketing and the U.S exchange rate. Â All that combined, the rocky mountains are bracing for even bigger crowds, which can also mean bigger headaches. 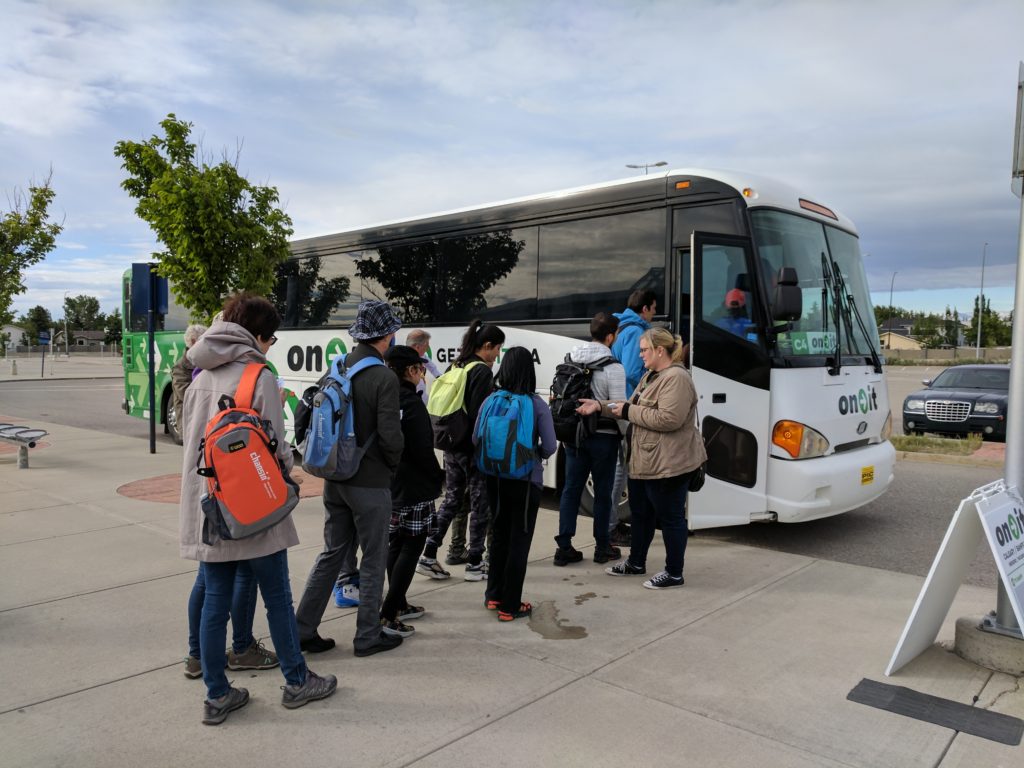 But fret not Calgarians who still want to visit Canmore, Banff and Lake Louise. Parks Canada has a plan. This past weekend, a new shuttle service is making it easier and cheaper to explore the mountains than ever before. Â The On In Transit system is offering $10 tripsÂ to Banff ten days a day until September 4th. But heads up, the service only runs Saturday and Sunday. But I’m hoping in the service proves popular, more rides will be added. Â  Calgarians can hop on the On It bus at either the Somerset or Crowchild LRT. There’s also stops in Okotoks and Cochrane. Â  That means, for a $20, you can get yourself a relaxing round trip to Banff and not have to worry about traffic and parking.

With the sun shining and our eagerness to start our summer weekend getaways soaring, we decided to book our seats on the shuttle this past weekend and had a great time. 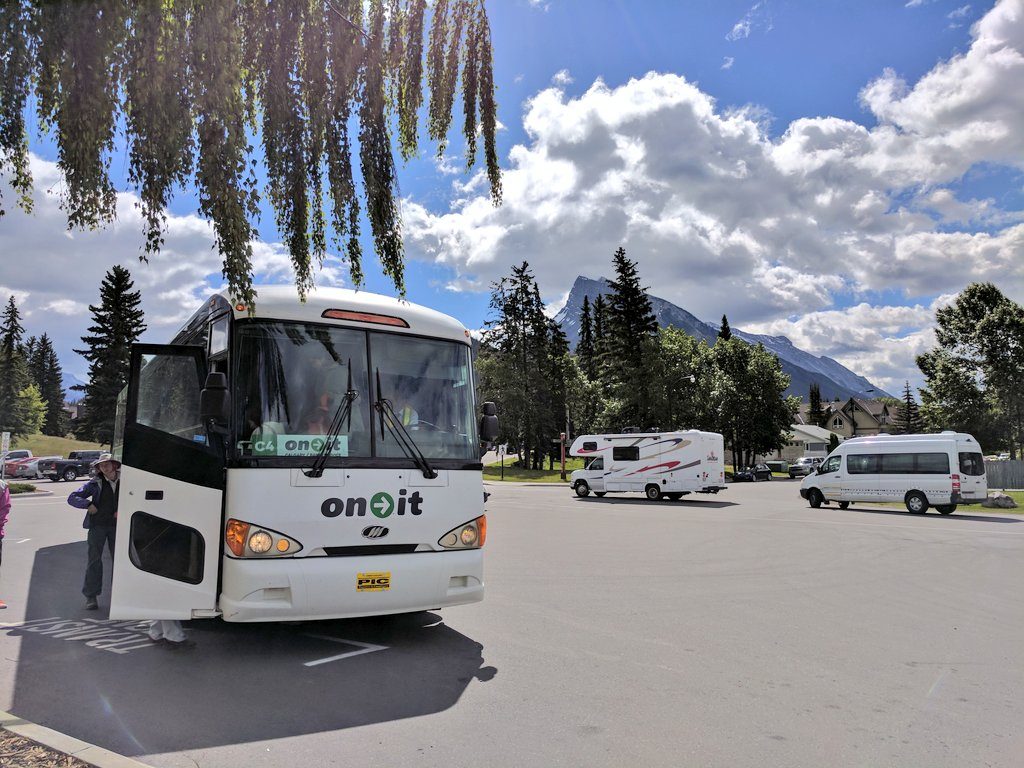 Between Richard and I, he’s almost as the driver, and I’m the one who is stressed about every other car on the road until I eventually fall asleep. This happens no matter how short the trip. I’m like a baby, if the car is moving, you can pretty much guarantee that I fall asleep. Â So the shuttle is perfect for people like us, especially after a busy few weeks. Once we stepped on board the motor coach, we almost instantly felt more relaxed. We weren’t worried about traffic, gas, going to the washroom (the bus has its own bathroom), or any of the other things that stress me out when we’re driving…which tends to be everything. 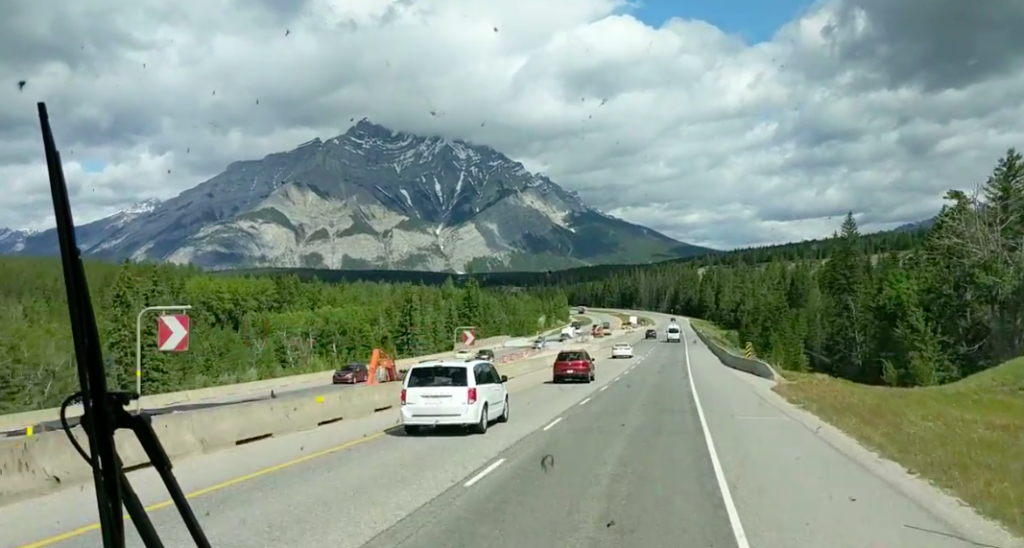 Instead we grabbed front row seats and were treated to one of the prettiest drives in Canada.

When we got to Banff, there’s two stops: One at the Banff Train station and the other is the Banff high school, which is right in the middle of the town. Â From there, you’re able to walk and enjoy all the sights and sounds of Banff that has people traveling all over the world to enjoy them. 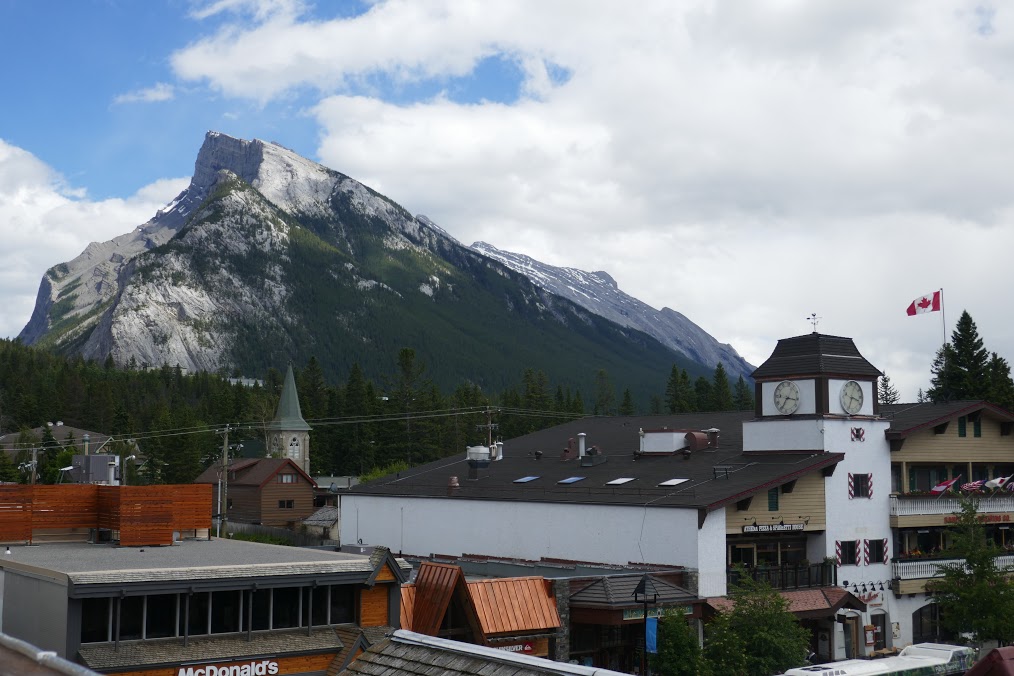 If you want to explore some of the attractionsÂ that are outside of the downtown core, well guess what, you’re On It pass comes with free access to Roam Transit, which has increased its schedule ahead of a busy summer.Â The Roam transit routes can take you all over Banff and there are bus stops pretty much anywhere you need them to be. Be sure to download the NextBus app, which tells you where to find the buses and when you can expect the next time. Â If you do end up driving to Banff, an all day pass to Roam is only $5, so you can park you car and just get around easily using their transit system. 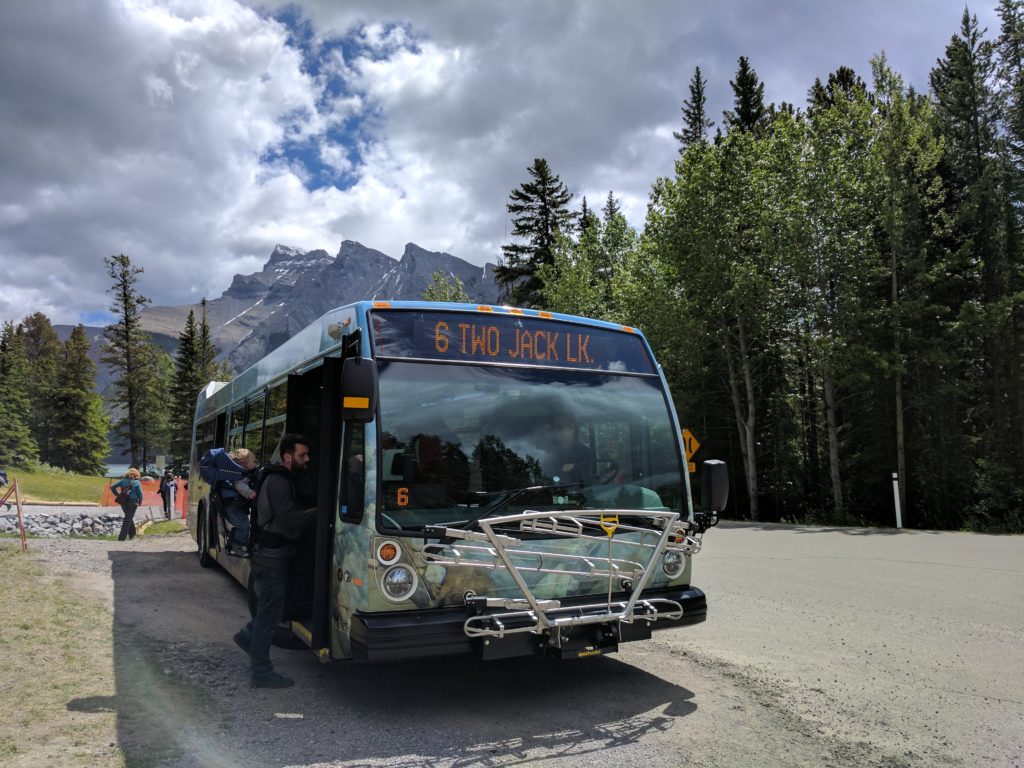 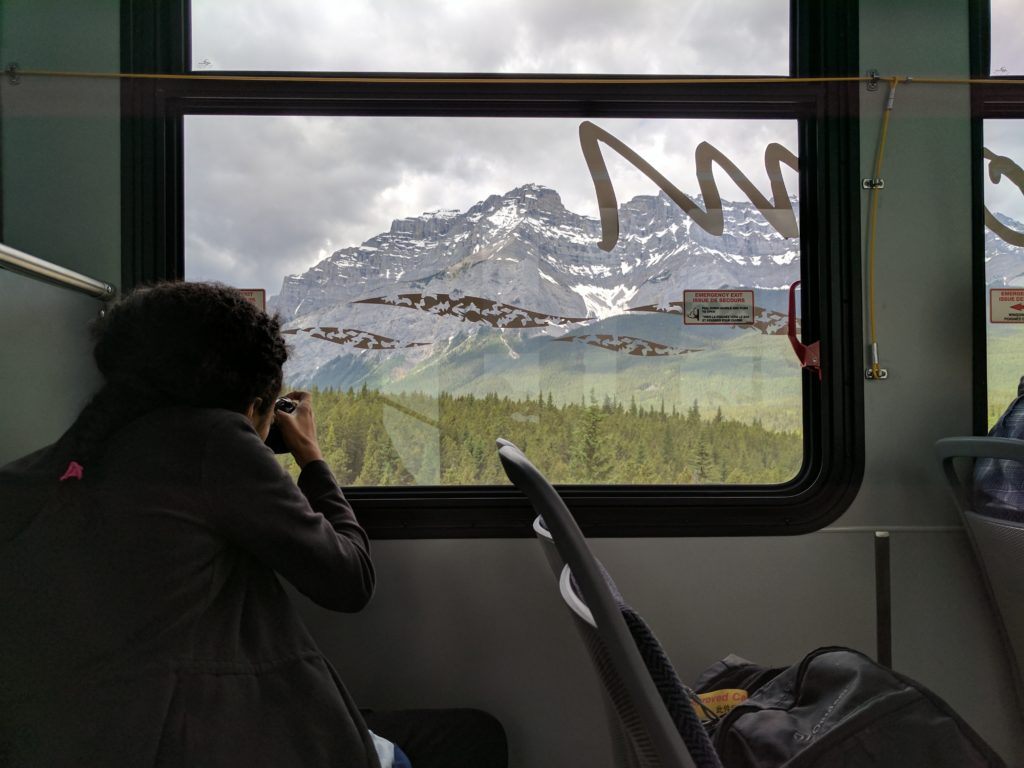 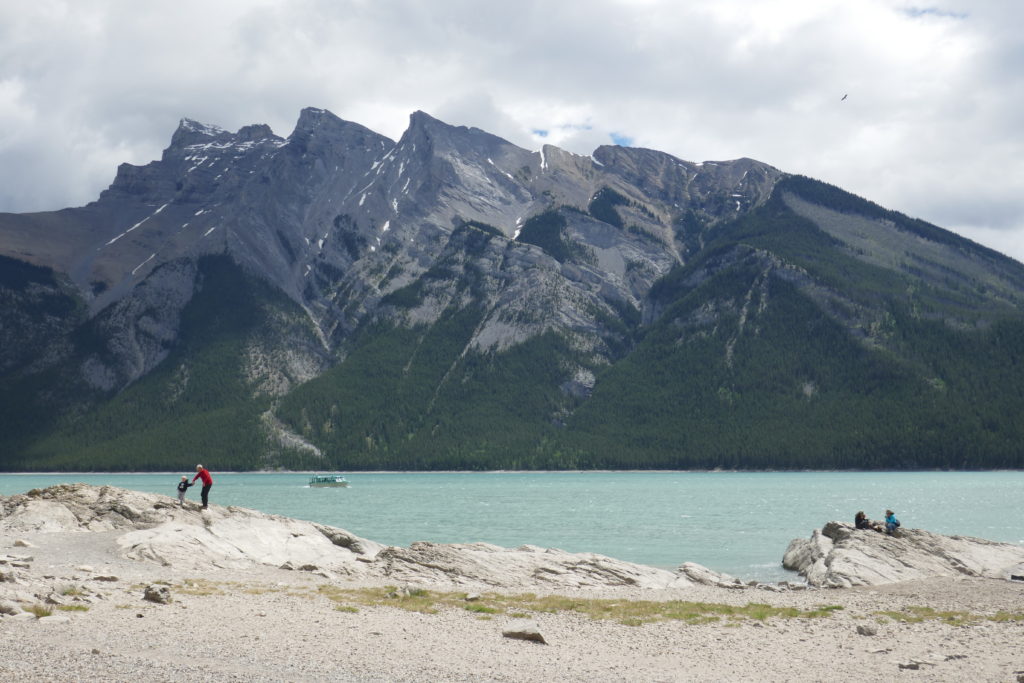 Our first stop of the day was the Lake Minnewanka loop. The Roam bus has a few stops along the loop, meaning you can stop at one lake, enjoy it for a bit, then hop on and enjoy the next one. We headed right to Lake Minnewanka and enjoyed a little picnic, and, of course, took in the always-breathtaking views. Â  When we were ready to head back to Banff, we just hopped back on the bus and we’re back in town in no time. Â Watching the cars try to manage the limited parking along the loop and knowing we didn’t have to worry about it was worth the $10 On It ticket alone!

Once back in Banff, we got on another bus to check out the Cave and Basin, which actually is the first national historic site in Canada. Â The bus was free because of our On It ticket, so even though we had been in Banff already for a few hours, we still hadn’t spent more than $10. That’s pretty cool. 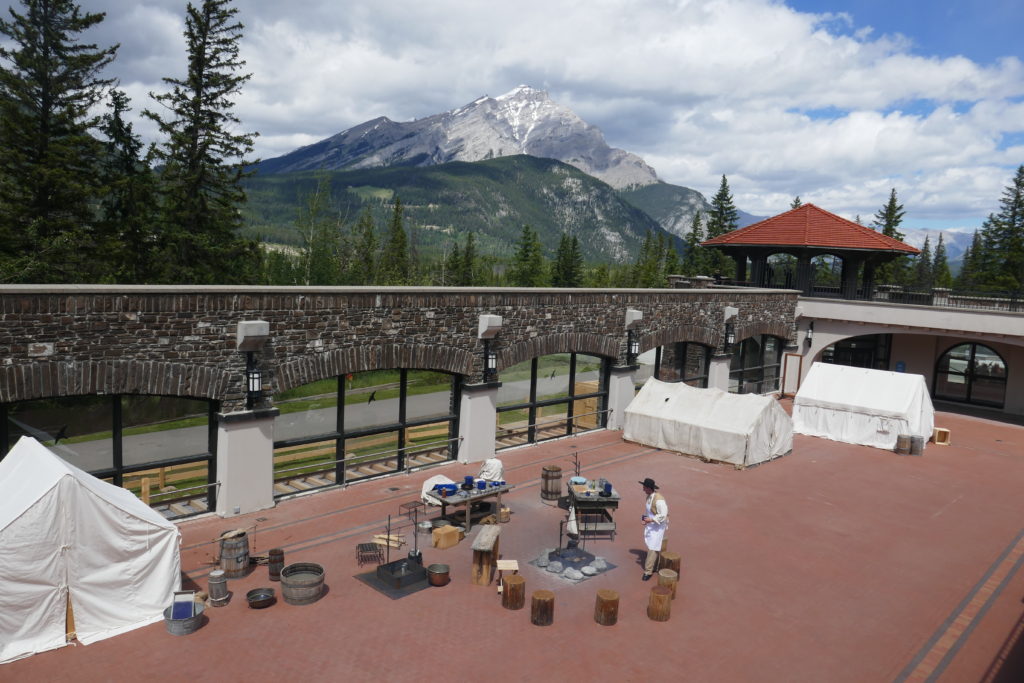 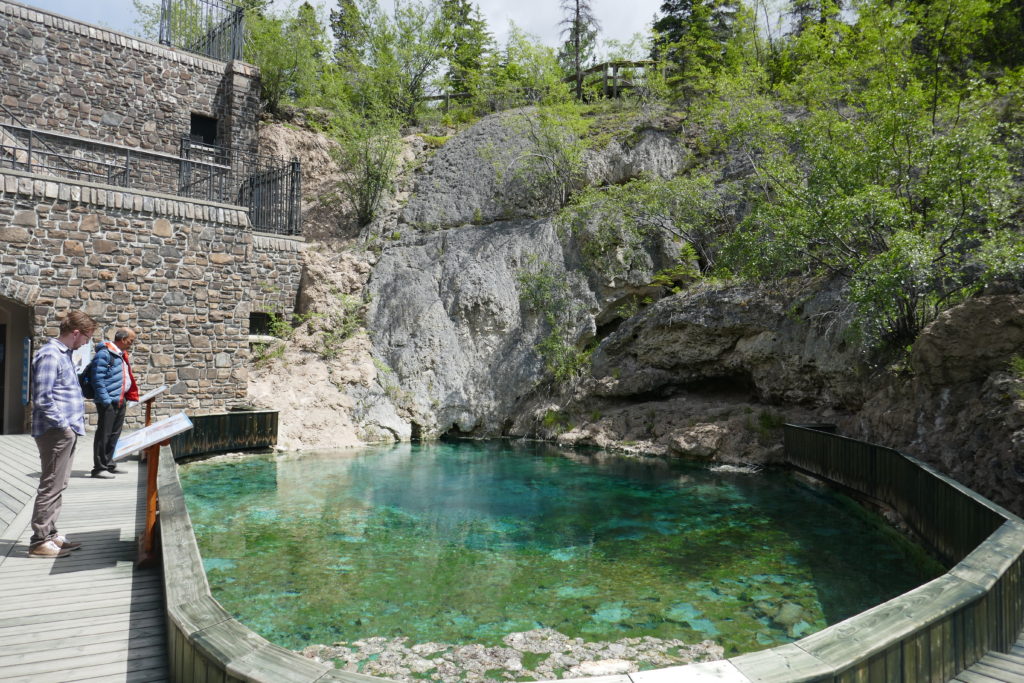 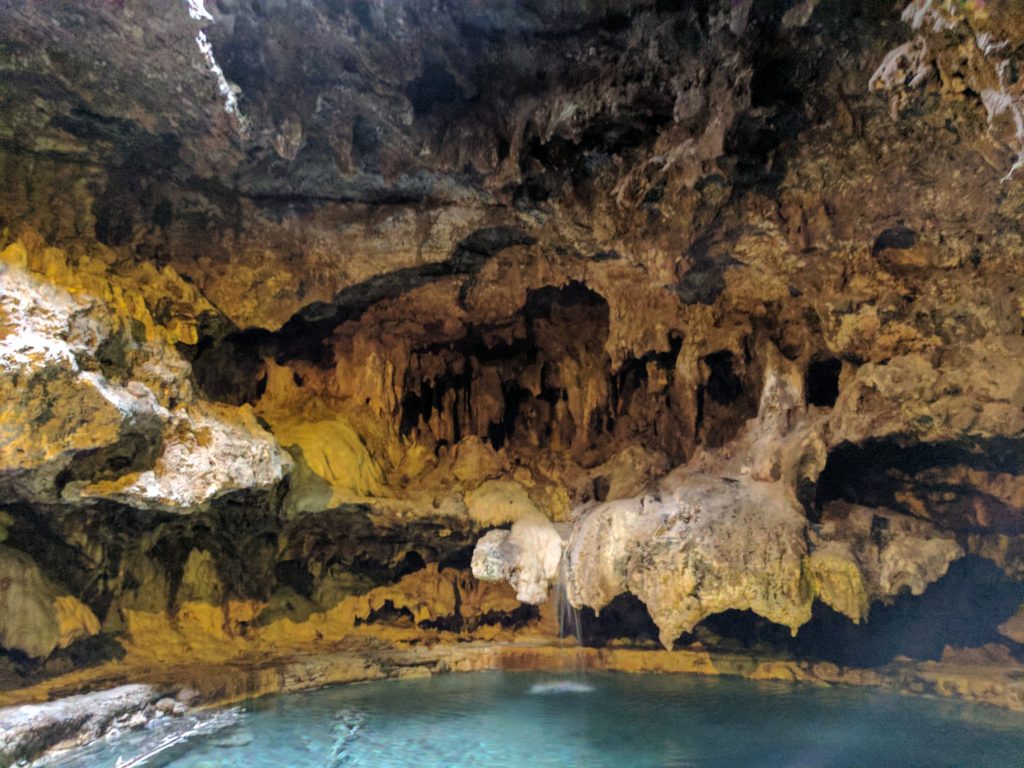 Now I have a feeling I’m the last person on earth to visit the Cave and Basin, but it really is beautiful. TheÂ only thing more fascinating than it’s history, is what’s happening underneath the ground. I’m not going to pretend I could explain the hot springs and the area, but it has to be seen to be believed and guess what, thanks to Canada 150, it’s free to explore this year. So yeah, we’re still at $10 for the entire day. 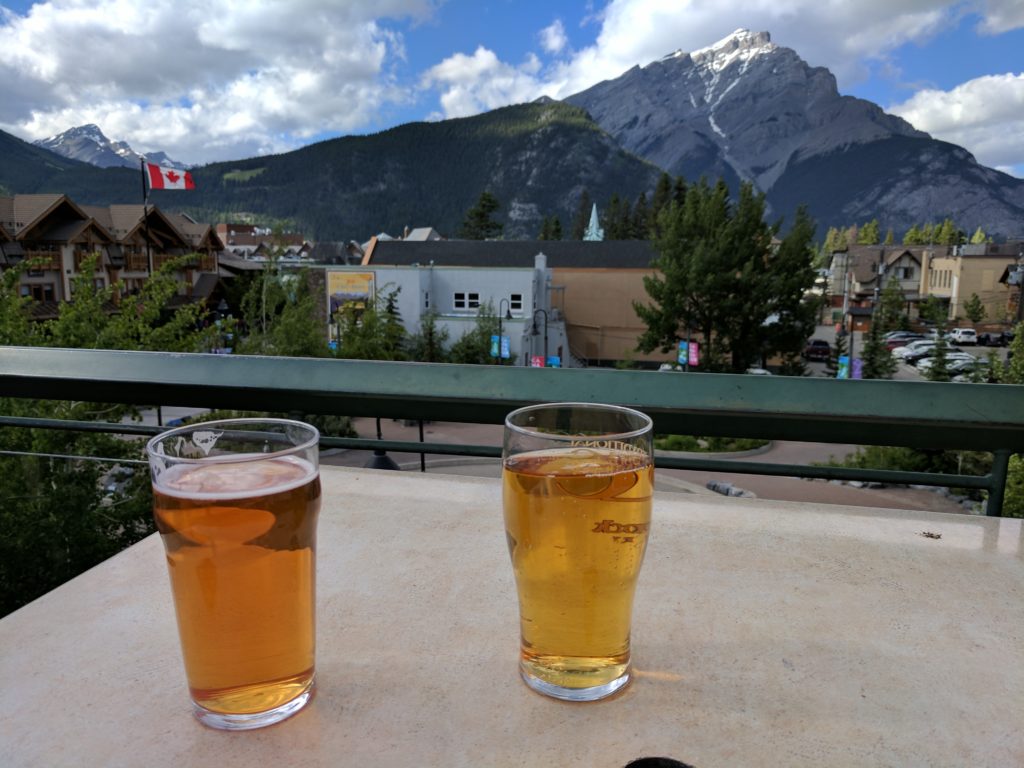 All the exploring, we had worked up an appetite, so we headed back into downtown Banff and spent the next little bit eating, shopping and yes, enjoying a drink. Â Since neither of us were driving home, it was nice to sit on the Rose and Crown patio a bit longer than we would have normally and relaxed knowing that a smoothÂ ride home was all that stood between us and our kitty.

With our day winding down, we decided it was time to head home. So we purchased our $10 return tickets and grabbed on our seats on the bus. Rather than worrying about staying awake, we both sorta dozed off with the sunsetting behind the rockies on what was truly a great trip to Banff. We’ll be heading back in a few weeks though, to continue to explore. Â Parks Canada has also set up a free shuttle to Lake Louise from the Banff Train station. I’m excited for that one, because when I was Lake Louise last summer, it was packed and this summer is proving to already be way busier.

The On It system is in a pilot phase right now, but I do hope it stays. Being that relaxed and care-free, really is addictive.