Theatre Review: Fiddler on the Roof 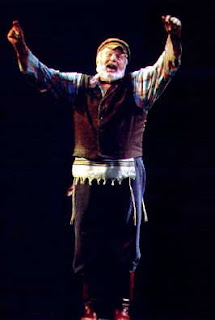 It’s always hard to review shows that have been around for so long. Obviously they are good, or they wouldn’t have become the classic shows that we all know and love. But a good show can also be a safe show. What makes for a great show, is when a classic can still have surprises and laughs in almost scene. Fiddler on the Roof is that show.

As a part of the Broadway Across Canada tour, Fiddler opened up in Calgary on Wednesday night to a packed house.

For me, the show was a life changing experience. I’m not being dramatic, because five minutes into the show, I realized that for my entire life I had been confusing Fiddler on The Roof for the far more depressing Dr. Zhivago. My mood and excitement level increased dramatically. A surly old jew with five daughters? Now that is a musical I could get behind.

The great thing about seeing a show that everyone (except for me) knows and loves, is that the audience is overflowing with joy the second Tevye (Theodore Bikel) walks onto the stage. Every time I looked around, everyone had giant smiles on their faces, as they sang along to the songs that we all know, but don’t really remember ever learning.
To be honest, there is really nothing wrong the show. It is funnier than you remember. The production value is huge, especially for a traveling the show. There was nary a weak link in the cast, again a rarity for a show that is in a different city every other week. All of the show’s biggest numbers are strong and blast to watch. There is always so much to watch, your eyes often have a hard time keeping up.
The show’s biggest fault was the titular fiddler. He didn’t have a single line and he was only asked to show up every now and then and play the fiddle. Easy gig, right? Then why wasn’t he really playing the fiddle? It was blatenley obvious that he was only motioning as if he was playing, and that someone in the orchestra was actually the fiddler. I’m guessing this was done because Fiddler in the Orchestra Pit, doesn’t have the same ring to it. But surely, there must be some canadian actor that can play the fiddle. Did they really have to fake it?
Fiddler on The Roof plays in Calgary until January 17th, before moving to Edmonton from January 19th-24th.