The line-up the sounds pretty stellar and for Calgary’s most popular theatre company, I’m sure it will be a banner year.  If my tone sounds a little blah, it’s because I’m kinda annoyed.

Stephen Hair. Now I can already feel the hatred of Calgary hovering over this blog but truthfully, I’m jealous. Hair has been playing the role of Ebenezer Scrooge for a total of 18 seasons and for some reason I  keep missing the audition announcement.  The theatre company says the “all new production” will be “bigger than ever!” So you tell me, what could be bigger than hiring a 28 year old to play at 79 year old man.  Let’s be honest, I have the hairline of 98 year old.  It wouldn’t be that much of a stretch.

As further evidence, Christmas Carol has always been a part of me.  When I was eight years old, I played Tiny Tim next to the legendary Douglas Campbell.  See.  Look how cute we were: 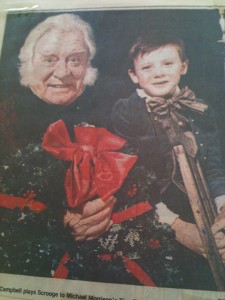 I’m not saying that I want to take the role of Stephen Hair.  If I know anything about this city, I know that  Calgary will always try to resist change at whatever cost, so I’m certainly not going to be the one to take the job from a the talented actor, I just think it would be nice to know that I can at least try.

I’ve been waiting my whole life to play Ebenezer Scrooge.  I guess I can wait a few more years.