The Worst American Idol ever?

With the first semi-final round starting tonight, I just have one question.

How the hell is Tatiana Del Toro in the top 36?
She is by far the most annoying contestant on the show ever! Sanjaya? Ace Young? Kristie Lee Cook? Nope, none of them have anything on her. She hurts my soul. She hurts my inner most deepest part of my soul. She makes me want to buy the entire Chicken Soup For the Soul series and then pour that soup on my face. Assuming of course it is scolding hot soup. Especially if it’s that annoying teenager series. Watching her makes me feel like I’ve grown out my toe nails for months and then put on shoes that are 3 sizes to small and than ran a marathon. I would rather watch the entire series of According to Jim than listen to this teeth crushing singer.

A wee bit dramatic?
See for yourself:

How oh how did she make it the finals over Jamar Rogers? I honestly had him pegged to win the whole thing. I guess American Idol still isn’t ready to fully commit to actually finding the best singers in the country.

If you loved Jamer too, you can join one of dozen 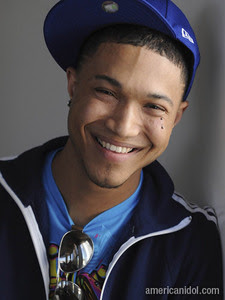 I joined four of them.