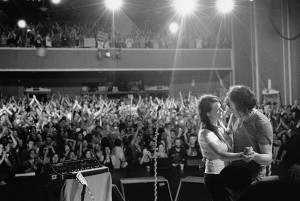 Earlier today, the popular alternative band, The White Strips, announced that they were splitting up. Wearers of skinny jeans across the world are obviously devastated and are probably asking themselves, “What happened?”

I just finished reading an article in Toronto’s NOW Magazine and it was interesting to read that we canucks may have been the last ones to experience the last tour of The White Stripes and in their documentary “Under the Great White Northern Lights“, the band’s sadness was “palpable.”

If I’m being frank, I’m not a giant fan of The White Strips but I’m guessing that their Canadian tour, which included playing all ten provinces and two of the territories, would have put pressure on any band.Â  Let’s be honest, that’s a whole lot of CANADA!

So instead of mourning their demise by listening “I’m Lonely (But I Ain’t That Lonely Yet)” on endless repeat, maybe we should mark the occasion by listening to an altogether different song: