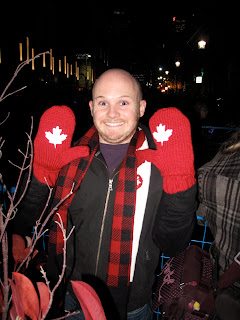 The Olympic torch finally made it’s way to Calgary tonight. And even though I’ll be at the Olympics in Vancouver next month, I was excited for the big celebration to be taking

Once finding a solid spot along the route, my friends and I waited. And waited. And waited. It was about an hour of waiting until the torch finally passed by. We knew it was going to be worth the wait, because we had a sweet vantage point and there was no way we wouldn’t get some sweet pictures. Now I don’t mean to brag, but check out the one and only picture I was able to get: 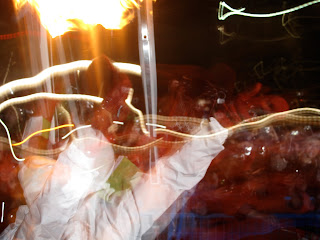 Pretty sweet, eh? Look out National Geographic.
Obviously this was worth enduring the crowds of thousands just to see the torch for two bloody seconds.
But on a serious note- What the hell sort of crap is this picture? Ugh. Terrible, just terrible. It looks like your toilet, the morning after you mix baileys, wine and rye at a seafood buffet.
This is the problem with having a “fancy” camera, you never know what feature to use and how to use it.
Besides screwing up a prime photo-opportunity, it was great to see such a great crowd out celebrating the Olympic spirit. Better yet, there was a hardly a cowboy hat in site, I thought for sure those Stampede-loving freaks would show up at some point. But it looks like they stayed far, far away!
Is anyone getting really excited for the Olympics?! Look out women’s curling. Here I come!
Extra: My friend Colin was also there, as you can read, he had a VERY different perspective from me. His cheer would probably sound like, “Go Canada Go?”