The Tale of Sanjaya 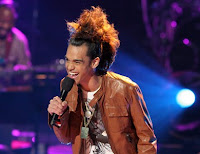 Whether you watch American Idol or not, youâ€™ve no doubt heard of Sanjaya. He seems to be everywhere nowadays and unfortunately it doesnâ€™t seem to be for the right reasons. As the article in the Calgary Herald entertainment section pointed out today, Sanjaya is an alright talent at most, but because of numerous outside contributing factors, him and his flowing locks seem to actually have a chance at winning this thing.

I am by no means a Sanjaya fan. Iâ€™ve have yet to select who Iâ€™ll put my useless Canadian pretend vote behind, but it would definitely not be Sanjaya. But in saying that I canâ€™t help but feel a little excited at the prospect of him being crowned the next American Idol. What a twist it would be.

For 6 years now the producers have reveled in showing us the worst of the worst and just some of the best. For two months every year 30 million people sit down in front of their TVs get a kick out of other peoples pain. And so finally what happens? Donâ€™t one of those buggers actually sneak through and make it to the finals!

Well I say: good for Sanjaya! The judges and the media are so quick to blame anti-American Idol campaigns like Vote for the Worst and Howard Stern. But arenâ€™t the judges and the producers the ones that kept Sanjaya through countless auditions. They cut his equally talented sister but because he made good television he kept making it through.

Well producers thatâ€™s what you get. As opposed to making this an actual serious talent competition you always let a couple others through for different reasons other than talent. And now it is coming back to bite you in your Coca Cola sponsored ass. Call it what you will, you are reaping what you sowed and sleeping in the bed you made.

As Simon Cowell loves to say: â€œThis is a talent competition.â€ And unfortunately the producers tend to forget this. If Sanjaya wins the competition, I hope that the producers learn their lesson. Keep the talent in and the drama and â€œgood televisionâ€ at home. We get enough of that elsewhere.