The Tale of ‘Nice to Michou’ 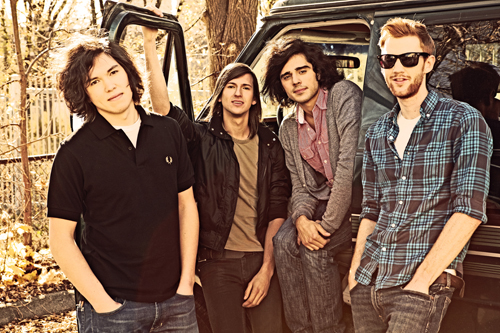 Have you ever heard of the band Michou?

If not, it’s alright, before Juno Weekend neither had I.Â  But now that I have heard of the Ontario band, they are quickly moving up my Must Listen to Daily Play-list.Â  Hailing from Windsor, ON, MICHOU is Mike Hargreaves (vocals), Sasha Appler (keys/trumpet), Ryan Frith (bass), and Stefan Cvetkovic (drums). I don’t know about you, but there were probably lots of ways I was going to hear about the band.Â  Whether it was on CBC Radio 3, Itunes or randomly on Myspace.Â  Yes, I still use Myspace.Â  But no, I found out about the band in much stranger way.

My friends always say that I suffer from FOMA or Fear of Missing Out.Â  So when I was in Toronto for the Junos and heard about any parties that I wasn’t invited to, I got really annoyed.Â  I really wanted to go to this one specific party sponsored by Gibson guitars.Â  My emails to the party’s publicist went ignored, so I thought I was out of luck. Well as chance would have it, my friend knew some people who had been invited and it was implied that if I used one of their names, it wouldn’t be a problem to get in.Â  All I had to do was say thatÂ  my name was Mike Hargreaves and I was the lead singer of a band called Michou.Â Â  Easy right?Â  Wrong.Â  I’m the worst liar in the world.Â  Even though I was assured that Hargreaves wouldn’t be coming to the party, I was convinced that the people at the door would know that I wasn’t who I was saying I was.Â  Mostly because if there is anything I look like, it’s not the lead singer of a band. Unless that band is fronted by Moby.

Well after a few preparatory shots, my friend and I checked into the party with zero problem. For the rest of the night, I would be Mike Hargreaves (Far right in above photo.) No problem right?Â  Wrong again.Â  After wandering around the party and saying hi to a few people, I ended up talking to a nice group of party-goers.Â  I asked the usual networking questions like, “What to you do?” and “Where ya from?”Â  One guy mentioned that his name was Ryan and he was in a band. “Oh cool, what band?” I asked.Â  “This band called Michou.”Â  Shit. 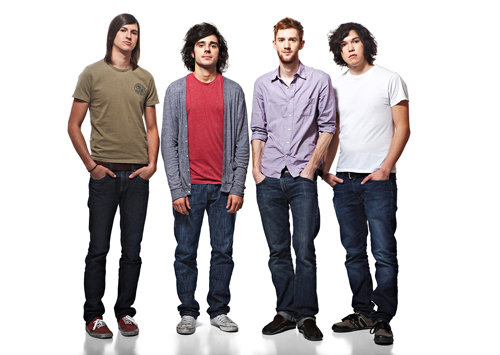 I must have turned eight colours of red because I was completely embarrassed and I could tell that people were alarmed by instantly bright red complexion.Â  Typical Mike – Of course one of the first people I ran at the party, that I had snuck into, was the bass player for the band that I was pretending to be in.Â  Classy bloggity, real classy.

Turns out,Â  Ryan was really cool and thought the whole story was hilarious. Phew.Â  It could have been way worse.Â  So on my way home from the Junos, I knew I owed it to myself to give the band a listen to.Â  As luck would have it, Michou is good.Â  Like really good.Â Â  Picture a great blend of Death Cab for Cutie, with a dash of Jason Mraz. And I’m happy to report that unlike most Canadian bands, these guys seem to wear clothes that fit them and don’t seem to own a hair straightner.Â  This, Canadian music industry, is what I call progress!

The boys from Michou are about to embark on a national tour and I’m highly recommending that you check them out.Â  Their music is fun, catchy and when you go, say that you know me.Â  Actually don’t, they might still let you in.

Here’s their upcoming tour schedule and check out one of my favourite Michou videos below.Â  Single shot, bikes and unicycles.Â  What more could you want?