The story of my first bike.

Here in Calgary, there’s been a lot of debate in City Hall about the future of cycle tracks around the city’s downtown core. Â I’ve spent hours writing columns, Twitting and Instramming my support. As someone who uses his bike every day, I can’t think of a better decision for a city than to support a growing network of cycle tracks. With more and more people supporting the idea of Calgary becoming a bike-friendly city, I thought I’d take everyone back exactly two years ago, when I bought my first bike.

I havenâ€™t always loved biking. In fact, for the majority of my life, I didnâ€™t even own a bike.

I bought my first real bike two years ago this month. Sure, I had one when I was a kid, but one day I came home from summer camp only to find out my parents had sold it, â€œbecause I wasnâ€™t using it.â€

So, in 2012, at 29-years-old, I walked into a local bike shop and decided to buy a bike. It wasnâ€™t to improve my health, or make less of an impact on the environment. It wasnâ€™t even to save money. It was because I missed my friend.

A few months before I bought my first bike, my friend died in an accident at a nearby ski resort. It devastated our group of friends and to this day, it still does. When you lose someone tragically, one of the steps of mourning is to do things in their honour. Some people get tattoos or go on a trip, I got a bike.

You see, my friend used to bike by me every day on his way to work. We lived close to each other and weâ€™d take the same path. But I loved walking (and still do) and he loved biking. So every morning heâ€™d ride by me, say hello and keep going. To ensure I never missed it, I wouldnâ€™t put my earphones in until I heard him say hello. I never asked him to stop, because every pedestrian knows making a cyclist stop to walk with them is a cruel and unusual punishment. The days after his accident, when he didnâ€™t bike by, when he didnâ€™t say hello, those were the worst. The hardest. I hate those days.

As the weeks turned into months, I struggled with a way of how I could honour my friend. The idea of getting a bike kept surfacing. He and his friends loved biking so much and it always looked like so much fun. At his funeral, his blue biked leaned against his coffin, right beside his hockey stick. If he loved biking so much, and I loved him so much, then getting on a bike again seemed like the best way to acknowledge his impact on my life.

In early April 2012, I went to a local bike shop and bought my first bike. Like in the days after hearing about my friendâ€™s death, I remember every second of it. Browsing the selections, testing a few, picking out a helmet and eventually riding away from the store. If it was a movie, the director probably would have had a single solitary tear coming down my face, but I didnâ€™t cry. I smiled. In the first few moments of owning my own bike, the warm breeze confirmed to me that I had made the right decision.

Since that very moment I fell in love with biking. I donâ€™t know if Iâ€™m particularly good at it, but I love it. And because I write about what I love, Iâ€™ve become an unlikely advocate for biking in Calgary, whether it be safely on the streets, on our beautiful pathways along the river or on our (hopefully) growing cycle track network. I donâ€™t think biking is the way to get around the city, but I do think it is a way and a fun one at that. I hate the reason I started biking, but Iâ€™m so glad that I now love owning a bike. That would make my friend happy and thatâ€™s all I can ask for. 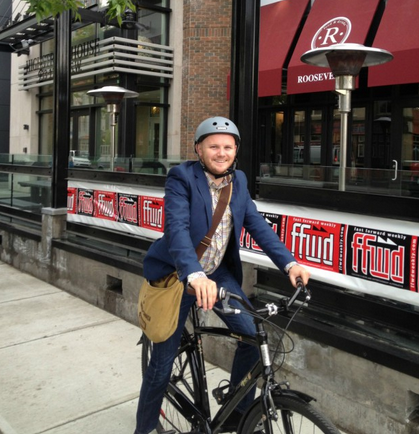