The Royal Tour! (Yup, there’s an app for that!) 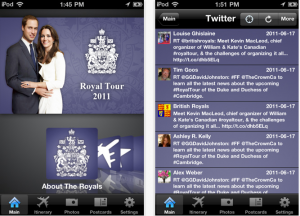 So are you getting excited for the Royal Visit?Â  William and Catherine will be landing down in Canada any day now and if you’re in one of the city’s that they’ll be visiting, you know that every neighbourhood seems to be abuzz with the imminent arrival of the world’s most famous couple…sorry Brad and Angelina.

In what can only be described as “interesting”, the Canadian Government just announced a brand new iPhone and iPad app specially designed to help you follow William and Catherine as they make the long-trek across this country.

It’s simply called Royal Tour and it won’t cost you a penny.Â  The app isn’t as exciting as Angry Birds, but it does include the couple’s full itinerary, with photos, video and from tweets their nine-day trip, which begins on June 30.