The Return of Michael Bernard Fitzgerald!

This next bit of news is a like a nice glass of pinkÂ  lemonade or whatever gives you that feeling of putting your shoes on after a long day of skiing. 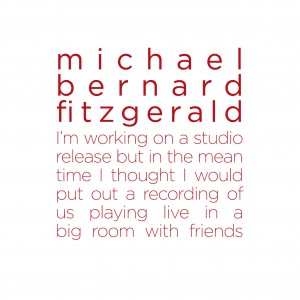 Calgary singer Michael Bernard Fitzgerald has announced that he’ll be releasing a brand new live CD. Ahhh.Â  Don’t you feel better already?Â  The album is cleverly called, “â€œI’m working on a studio release but in the mean time I thought I would put out a recording of us playing live in a big room with friendsâ€ and will be released on June 25th. It will include songs from his various previous released including: The MBF Love LP,Â  â€˜Dressing Room Sessionsâ€™, a few unreleased songs and moments with Michael, as well as a cover of Bruce Springsteenâ€™s Dancing In The Dark.Â  If it’s not too late, can we make sure ‘Valerie’ is on the disc.Â  It’s one of my favourites.

To celebrate the release, MBF will also be playing a secret-live and interactive show that will streamed across the world

Tickets to the show cost $22 and it will get you a signed copy of Michaelâ€™s new live album and a password (on the day of the show) to stream the upcoming June 25 live gig.