The return of Chicken Little! 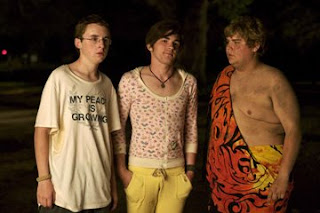 First it was Katherine McPhee and now it is Kevin Covais’ turn.

That’s right good ol’ Chicken Little from the 5th season of American Idol makes his major motion picture debut in this weekend’s College (I don’t even want the trailer on this site). Aside from having probably one of the most boring titles ever for a movie, it is only expected to make about $6 million this weekend, although I think it will be way lower than that!

I spent the night tossing and turning thinking about this. Why was even Kevin cast in this movie? Does the studio think that he can bring in an audience? Was he the cheapest? Does he have a terminal disease and making a movie was his “Make a Wish”? But maybe this is a whole new career for Kovais, after all he is already cast in Lindsay Lohan’s next project called Labour Pains. I guess when you are an actor you have to take what you can get….of course I’m referring to Lindsay.

Either way, in case you are huge Kevin Covais fan I’m sure you’ll have a blast this weekend. If nothing else, you’ll have the entire theatre to yourself.