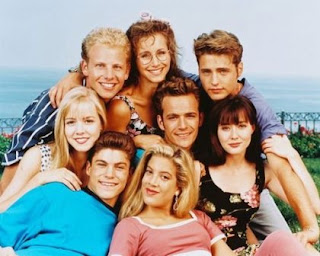 Â A couple of days ago The CW (yes they still exist) announced that in keeping with their youth programming that they were developing a spin-off of one of the 90’s most popular shows: Beverly Hills 90210!!

Â Â When I first saw the story Â I had to go back and read it again. Â Can they even do a spin-off this long after the original show went off the air? It’s been 8 years since we said goodbye to the gang and the world’s most popular zipcode (Am I the only one that still uses 90210 when they are need info from an American website?). Â And then I saw that Veronica Mars creator Rob Thomas was the one developing the show and I realized that it didn’t matter how old the show was it would still be good….but probably not great. I mean at it’s best 90210 was at the top on the “campy” pile. Â It’s not Lost, it’s not even a Gossip Girl. Â But 90210 pretty much introduced millions and millions of teenagers to so many issues that we would be facing over the next couple of years of our lives. Â Drugs, rape, murder, stalkers, crushes, love, marriage, bad clothes oh my! Â There is no ignoring the fact that shows like 90210 and Party of Five were among the most influential of their time.
But how are they going to do it all over again? Â Who is going to be in it? Â None of those details are released yet but they are going to be developing the pilot with the hopes of getting picked up for this fall. Â If Rob wanted to do this thing right he might want to take a page from the Degrassi page. Â The Next Generation was brought back a full 10 years after the original series ended. Â I think what made the new Degrassi work was that it gave us updates about all of our favorite characters (Joey, Spike, Caitlyn, Snake!) but introduced us to a whole new generation of messed up Canadian teens. Â Eventually the old Degrassi kids were moved to the background and guest spots, giving the screen over to those young and more than deserving of the spotlight. Â And the formula seems to be working. Combined Degrassi Jr and Sr High made a 40 episodes over it’s run. Â TNG has already produced a staggering 132 episodes and thanks to it’s huge American popularity shows no signs of slowing down.
So are Donna and David still together? Â And what about Brandon? Who even remembers Brenda and Andrea? Is Dylan even still alive? Â Will they be able to woo Hilary Swank back after firing her? Did Jim and Cindy ever come back from Hong Kong? Â These are all important questions that need answering and hopefully the show will be able to answer all these questions and more. Â Of course I hope the old regulars are going to show up, but lets also hope that the new kids of 90210 (maybe the spawn of our old favs) will face just as many trials and tribulations, just without the giant portable phones.Â