The return (again) of Denny? 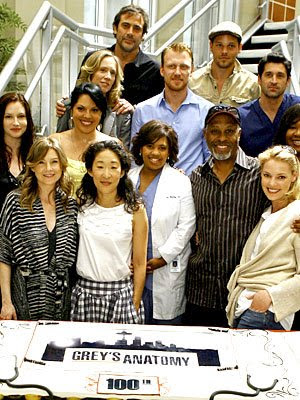 Recently the cast of ABC’s hit drama Grey’s Anatomy gathered together to celebrate the show’s 100th episode, which is a huge milestone for the often trigger happy network. As you can see, it’s a great picture, although it is missing TR Knight who had the day off (apparently they couldn’t wait). However there is one glaring issue with the picture that will surely drive Grey’s Anatomy fans to start performing their own surgery on themselves in protest. Why the hell is Jeffrey Dean Morgan is in the picture! Morgan has been playing the show’s most polarizing character, Denny Duquette, for the past several years, even though Douquette died in the second season. Fans were over joyed earlier this year when it looked like Denny finally went to the big hospital in the sky. But this picture might indicate otherwise.

So is Denny coming back (again) to celebrate with Izzy or is this just Grey’s Anatomy’s creator Shonda Rhimes way of throwing us off the scent of Izzy’s impending surgeries? Honestly, I don’t know what to believe!

I was so stressed about this picture, that I had to make a list. (Lists make everything better!)

5 Reasons that Jeffrey Dean Morgan is in the picture that hopefully don’t involve Denny coming back to Grey’s Anatomy.

So is Denny back for good? Do you even care? Is Dr. Hahn still in the parking lot?
Grey’s Anatomy airs it’s 100th episode on May 7th on ABC and CTV.