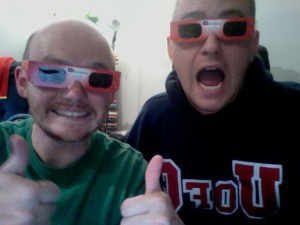 Get ready to watch HISTORY!

Tonight CBC will make broadcast history with their first showing of Queen Elizabeth in 3D!

Queen Elizabeth 3D is the first 3D television program to be Canadian-shot, produced and transmitted nationally on this scale. The documentary includes 3D footage of the Queenâ€™s most recent trip to Canada, including her reviewing the Canadian naval fleet in Halifax, and attending Canada Day celebrations in Ottawa and the Queenâ€™s Plate in Toronto, as well as archival colour 3D footage from 1953 and new material shot at Buckingham Palace.

I just picked mine my 3D glasses and it’s not too late to get yours.Â  You can go to any one of the more than 3,100 Canada Post outlets across the country to pick yours up. When I went on Friday, there were still a ton available.Â  But since the show debuts tonight, you are going to want to make sure you go to Canada Post at some point today.Â  There are about two million pairs up for grabs.Â  I’m guessing you’ll get quite the headache if you watch it without the glasses!

I can’t believe I’m this excited to watch a show about the Queen.
Oh and if you miss it tonight, you can catch again on the CBC News Network on Wednesday, September 22 at 10 p.m. ET/PT.

(Photo: Me and my roomie ready for the Queen!)