The Phantom is Back! 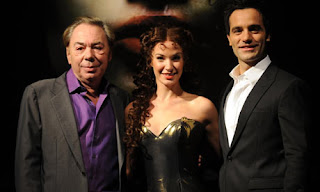 Here’s a fact that should make you feel better about yourself.

My roommate has seen Phantom of The Opera over twenty five times.
See, don’t you feel better now? I thought you would.
On a semi-related note:
The Phantom of the Opera is coming back to the stage for a sequel!
Now you feel bad again don’t you? But wait, there’s more.
Andrew Lloyd Webber is thankfully in charge of the sequel, so we know it won’t be complete shit. Even better, a Canadian is playing the Phantom!
The story will be about the masked one haunting the amusement park at New York’s Coney Island and the Phantom will be played by Toronto’s Ramin Karimloo and his love interest Christine, played by American Sierra Boggess. Again, how did I miss these auditions. I have to fire my agent.
The new show is called “Love Never Dies” and it should be opening in London in March of next year. You’ll also be able to see it in New York at the end of 2010 and in Austraila in 2011.
Would you go see the Phantom sequel? Do you think my roommate has major issues. All things to discuss in the comments section.

They’ve released a video of the first song, Till I Here You Sing Again. Check it out here. Not bad, not bad at all: