Thinking about your summer holiday plans? As an Albertan I often look to my neighbour to the west for a short getaway and a nice trip to the water. But, like most of this country, there are many places that we fail to explore. There are more things to do in British Columbia than go to a lake in the Okanagan or spend some time on the seawall in Vancouver (both are wonderful though).

Itâ€™s the sights off the beaten path that we sometimes miss out on. Like Vancouver Island for example. You could call it treasure island as there are so many things to find there that you may not have known existed. There is a lot of history to explore, from local aboriginal culture to the history of the old-growth rainforests.

If you are like me and thought that rainforests only existed in the Amazon and wherever the movie Fern Gully was filmed, donâ€™t worry. There are different types of rainforests. The ones in BC are temperate and are pretty spectacular, but if you wanted to find the best ones you would head to the west side of Vancouver Island. A lot of us have heard of Tofino. Located off the west coast of Vancouver Island, itâ€™s a place where a lot of folks go surfing, whale watching and participate in other outdoor activities.

You could spend an entire week enjoying the pristine coastline and the emerald forests, but letâ€™s say you have a weekend. What would you do?

You hop on a water taxi and go over to Meares Island. Youâ€™re wandering around the lush rainforest looking at trees that are up to 2000-years-old. You spend the day standing among giants, as the trees here are some of the tallest in the province. You climb over the extremely large roots and mentally keep track of all of the photos you need to post on Instagram when you leave.

You donâ€™t have the tree-giants blocking the sun, so make sure you pack your sunscreen and head to the beach. Not the surfing beach, but the other secluded ones up the coast. You hang out at the tidal pools. Look for some sand dollars, find some bright purple and orange starfish, and watch the tiny crabs scurry along Chesterman beach. 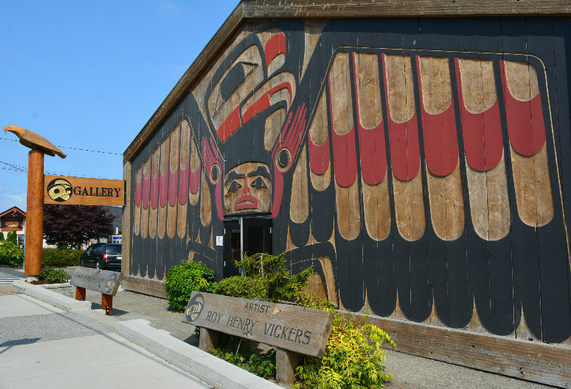 Learn about local culture at the Wickaninnish Carving Shed once, the home of master carver Henry Nolla. See the beautiful aboriginal carvings and paintings by Canadian First Nations artist Roy Henry Vickers at the Eagle Aerie Gallery which was built in 1986 by Vickersâ€™ family and Nolla. The gallery houses various artwork of fabulous paintings, original prints, calendars, cards, and reproductions all which hang on hand-adzed cedar walls among totem poles and carvings. Although small, this gallery is well-renowned and has approximately 500,000 visitors a year. You have probably heard of Vickers as he was the artistic advisor for the International Terminal at Vancouver Airportâ€”where some of his work is located.

The whole weekend is over. You have explored three very different parts of the area and thatâ€™s just in the summer time, there is still five monthâ€™s worth of stuff to do, but weâ€™ll save that for another day. I donâ€™t know about you, but all of this talk of rainforests and tidal pools has me calculating drive times and looking at flight prices. The trees, the starfish, the carvingsâ€¦they all await our arrival!