Canada’s most tear-worthy moments at this year’s Olympics!

The Olympics are on, and if you’re anyone but a robot, the first days have been filled with amazing emotion and definitely a few tear-worthy moments.  While there’s still lots of competition to go, here are a few of the best moments so far. We’ll update as Canada continues to cause stocks in kleenex to soar!

Mark Tewksbury freaks out over the first Canadian medal

We all had the feels when Team Canada won its first medal. Mark Tewksbury was mirroring the feelings that we all were having when the woman’s 4X100 freestyle team won our first medal of the game. MAJOR FREAK OUT!

Sandrine Mainville gets an on camera surprise!

Surprises like this make the distance from #CAN to Rio so much smaller. #StepUpStandTall https://t.co/PEYMIQovar https://t.co/tj6mUEHKGi — CBC Olympics (@CBCOlympics) August 7, 2016

After being part of the team to win Canada’s first medal win, Sandrine was surprised while being interviewed by CBC, by a visit from her parents who she hadn’t seen! Alllll the feels. 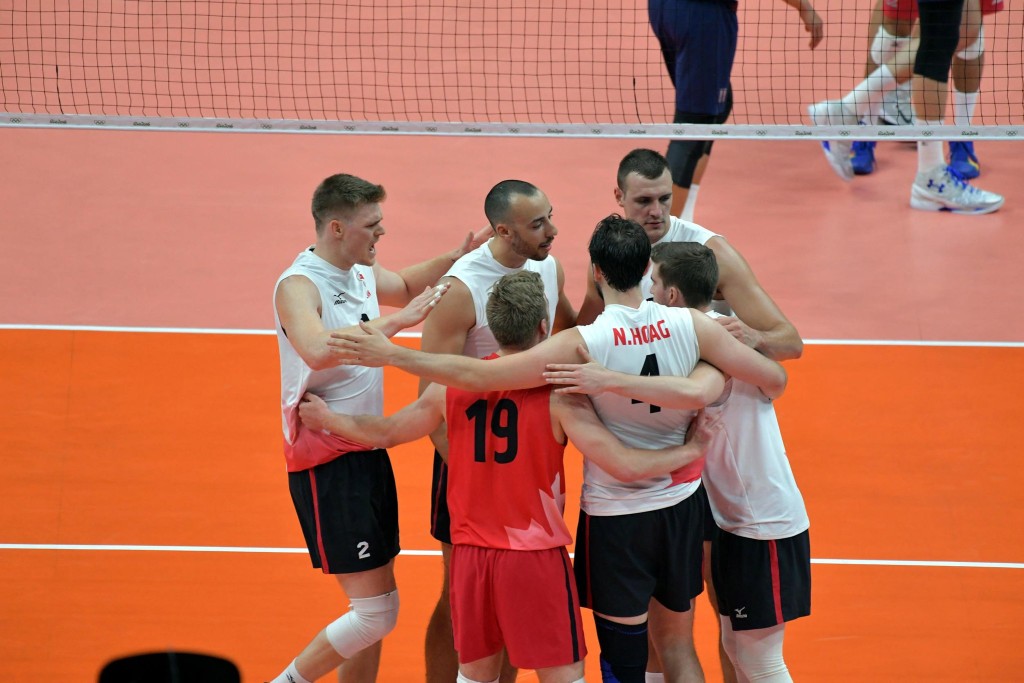 The Canadian men’s team barely made it to the Olympics…and they hadn’t qualified it in 24 years. So the moment when the team swept fifth seated Team USA 3 – 0, Canadians all over the world were like, “WE ARE GODS OF VOLLEYBALL!” The feels don’t have to make you cry – they can make you roar as well.

#CAN captain @jen_kish gets a Olympic hug from her dad after winning #bronze in rugby 7s! #Rio2016 https://t.co/cGiiLU1IDC

Right after winning the Rugby sevens bronze medal, team captain Jen Kish found her dad in the stands. There are hugs. There are tears. There are man-tears. There are feels upon feels! (You can read more about Kish and her dad’s story here, if you want to cry some more.)

It wasn’t until a week into the games, but we finally heard O Canada played when Penny Oleskiak won a gold medal in the woman’s 100m freestyle race on Thursday night. And what a race! If you weren’t crying after she won – you were definitely crying when they played the anthem!

Seeing the Canadian flag on top 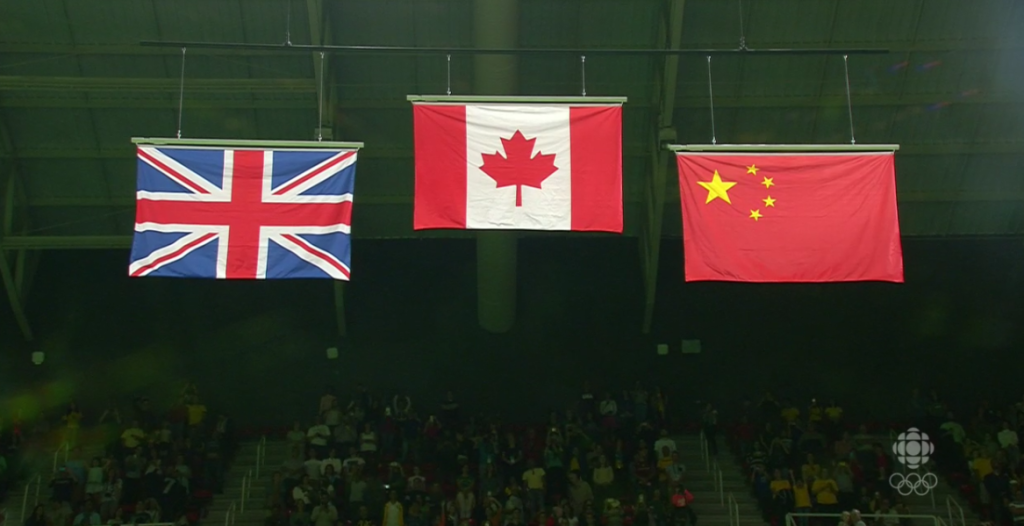 Rosie MacLennan won Canada’s second gold medal today in trampoline. She was Canada’s only gold medal from the 2012 Olympics and she made us proud again. Seeing the flag on the top of the heap – pure pride! 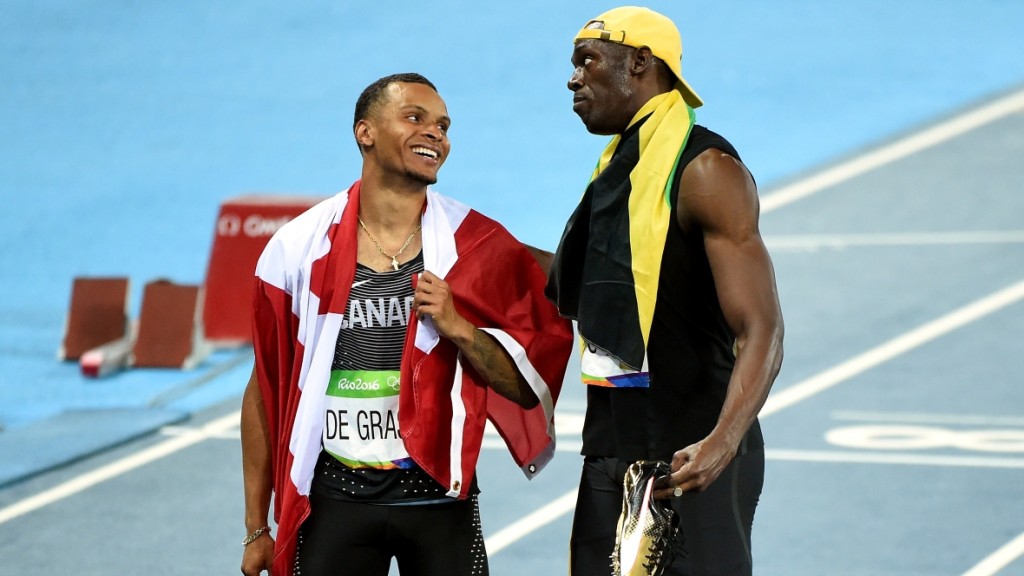 THEY WERE BEST FRIENDS! At least that is what we were all thinking after the high fives, hugs and exchanges that happened between Usain Bolt and Andre De Grasse on the day of the 100m final. At the end of the day the commentators had decided that they were best friends and Usain had chosen De Grasse as the next BIG ONE in running. I don’t know if this is true – but we’ll go with it because it makes us feel like Bolt just endorsed Canada – and who wouldn’t want that?!
Wiebe is the MOST excited Canadian Gold medal winner 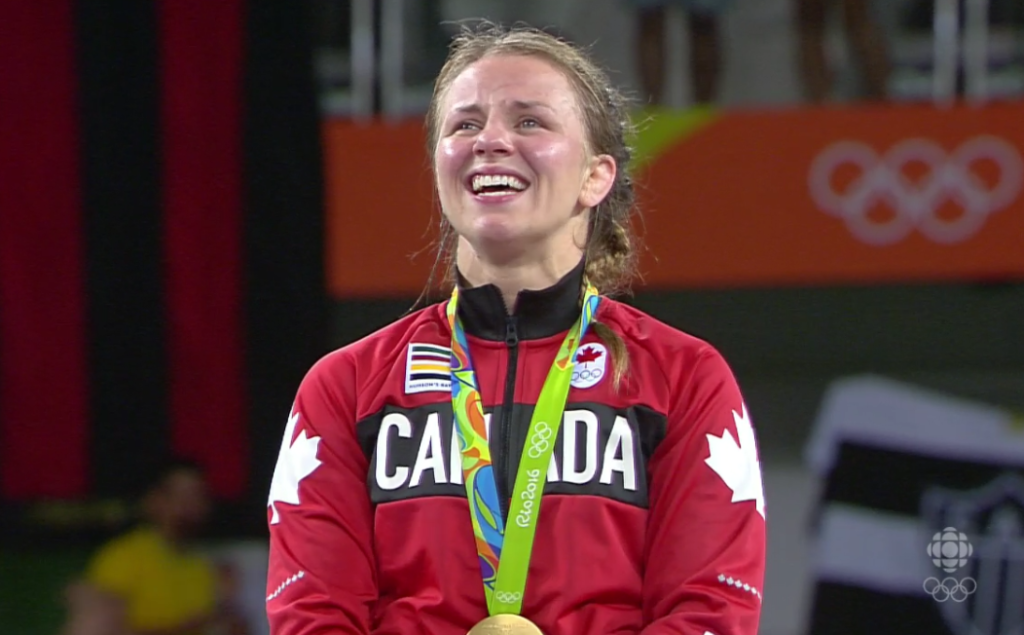 Erica Wiebe won Canada’s fourth gold medal today in wrestling! Singing loud and proud along with the anthem, while crying and grinning from ear to ear – she is who we would all be if we won an Olympic gold.