The night of too much information.

Tonight on American Idol, the producers realized they have picked a crap load of cappy guys and so they decide to fill our heads not with music, but useless information. Kinda like high school, but with commericial. 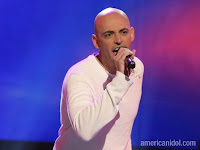 Phil baby daddy Stacey is up first. During his bio clip, he is shown to have been a member, apparently, of the Village People. He also plays the 9/11 card. Nice move Phil, nice move. You know what is not a nice move? Singing “Missing You”. What makes me mad about this is, is that at some point this week Phil actually thought this would be a good song to sing. What a boring way to start the show.

During the commercial I flipped to NBC, sure it’s Dateline. But it is Dateline: Pedophile House. You know the one, where they set up perverts in only a way reality tv fans will like. I’m glad they are catching these guys, but why do I find it so funny?

But I digress, back to American Idol…..

Oh good in the CocaCola moment says he is not going to try to sing “crappy”. Great ) , thanks, you are definitely Top 10 worthy.

Jared Cotter is trying to get it on. Why can’t these guys sing exciting songs? I mean obviously this guy can sing, he wouldn’t be here if he couldn’t,() but would it kill them to bring a little excitement to the stage. Also he is wearing white sneakers and regular viewers will know that how that makes me feel.

I liked when Ryan Seacrest pretended to have done things to “that song.” Me and you both Seacrest, me and you both.

AJ Tabalado is up next with…….. a ballad! Yes! We are so lucky. Let’s check in with the pedophiles…..both are disturbing, but I’m going to have to side with AJ. He actually did come through in the end. Does anyone else feel that maybe AJ is getting sponsored by Crest White Strips? 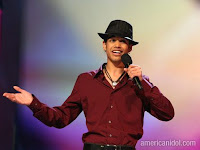 Speaking of white teeth, Sanjaya Malakar is up next. I like that he changed his look up. He needs to look a little bit older. But to be fair, he does kinda look like he belongs over on Dateline. This is FOX right? Is singing on pitch a compliment at this point of the competition. Also, I can’t be the only that notice that the audience barely muffled a boo. Sanjaya defended his song choice by playing the “Grandfather Card”. Cat loving secretaries around the world will be voting for him tonight.

Chris awkward comedic timing Sligh is up next. Woah Chris’ wife is hot! You are right Chris, I have no idea how you got her to marry you! There is hope for me yet. (sigh) Chris probably has my favorite guy voice in the competition and he has interesting song selection, but this early on, you need to pick songs that people will remember. Chris, I discussed this last week on my blog, why don’t you listen? Why Chris? why?

Holy Shit, someone needs to tell Nicholas Pedro that he is dating his long lost sister! Seriously, I would want to know that. “Fever” is one of my favorite songs, and Nicholas did a great job with it. He made it his own and was waaaaaaaaaay better than last week. Simon was snapping and Pauling was convulsing. That’s gotta be good, right?

I’ll admit it, Blake Lewis was the only performer that I was excited to see tonight. He brings a certain amount of unpredictability to the stage. By choosing to sing Virtual Insanity, Blake shows that he is reading my blog. Thanks Blake, I’ll send you an autograph. He isn’t the best singer, but he is super talented! This is by far the performance to beat…until tomorrow. Personal note: I think Blake would be good singing some Maroon 5. 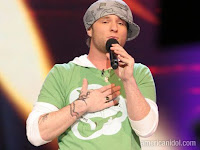 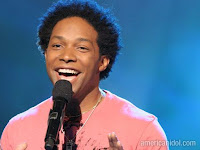 Brandon Rogers is going old school with some Cyndi Lauper. Has anyone ever heard the Matchbox 20 version of this song? Top 5 for sure. Oh wait, back to Brandon. Yeah he is doing good. I’m still trying to figure out how he is 29 years old? I would have said maximum 23. Did the earth just get cold? I agreed with Paula! We also learned alot about Simon tonight. He likes
puppies and his mom’s birthday is in November.

um, I mean Chris Richardson is up next. I was a little worried when he came out without a microphone. But there was a stand there, that could have been bad. You wouldthink when smart ass people like me are making the obvious comparison with him and the former NSYNCer, he would stray away from Justin type material. But he embraces it. It will be interesting to see how this works out! But I enjoyed it none the less.

My arch nemisis is up next. has a kid. This makes me like him even less. For me it would be like if Jim Belushi had a kid. One evil creates another. sings “Mustang Sally” This is soooooo ironic, but everyone knows that I call my little Saturn Ion Sally. This is a spit in the face , a spit in the face. You know how I feel about Sally, I love her and you singing this song is your attempt to come in between us. Well it won’t work . It will not. So he is singing maybe the easiest song ever. Come on, who couldn’t sing this song, I mean besides dead people and mutes. But even still, I’d rather watch them then this guy. Chump.

Should go home: and Sunjaya

Will go home: Aj and Jared.