The New Kids and other reunions we didn't ask for! 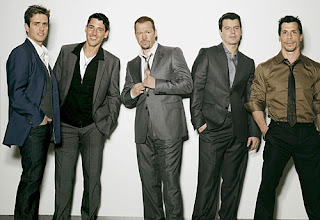 Look, I like the Spice Girls. Â Are there people out there who don’t? Â If there are I haven’t met them and nor do I want to. Â I was saddened to no end when the huge Spice Girls reunion tour decided to skip over Calgary and head right for Vancouver instead. Â But eventually (mostly when I heard there two new singles) I decided it was probably best to move on. Â And luckily so did the rest of the world.

But what the Spice Girls tour did was unleash a whole newÂ phenomenonÂ that no one in particular actually asked for: the reunion. Â Since the 5 member girl group decided to get back together, other forgotten stars of years past have decided to get in on the biggest money grab going these days. Â Since last year, bands like Ace of Base, The Jackson 5, The Osmonds have all decided to give stardom another try.
And on Monday morning tickets will go on sale for a group that so many of have paid so much money to try to forget are coming together again to give their fans one last shot at seeing them in concert. And unfortunately this time they are coming to Calgary.Â
Why New Kids on The Block why? Â Did you real feel that the public was really missing you guys that much? Â Did you think that maybe we had forgotten about you? Â Did you want to prove that you weren’t just an early 90’sÂ phenomenon? Â Well guess what, you are and were. And yeah, I saw your performance on the Today show and let’s just say time has done you aÂ disservice. Â Now thanks to you guys other bands are going to start reconsidering their decision to call it quits and I have to ask: Isn’t the music industry suffering enough?
Which is why I decided to compile a list of bands that we really don’t want to see reunited, just in case they start to get the idea that we do.
Creed: Wait a second, haven’t they already reunited? Â Aren’t they called Nickelback now? Â Or is it Finger Eleven? Â No wait it’s Three Days Grace isn’t?
LFO: Unfortunately I don’t this can happen any way due to the fact that most of the guys actually work at Abercrombie and Fitch now. Â And I think most of their Summergirls now have STDs.
The Moffats: You know what? Â I’d be okay with this one. I always have a little room on my Ipod for a some “Girl of My Dreams“. Don’t you?
NSYNCÂ I’d be OK with this as long as it was for charity. Â Like if Justin Timberlake was doing it to raise rent and grocery money for Lance, Chris, Joey and J.C. Â (And no I didn’t have to google their names). I’d be Ok with that.
Good Charlotte: Oh wait….they are still together you say? Well when they do eventually break up, this is a preemptive warning, we don’t care.
***For research purposes only I went and checked out the ticket master website and as of Sunday afternoon it looks like you can buy tickets right now. Â I got all the way to the click here to purchase screen which mean I could have bought them! Not that I would have. Â But click here to see yourself.***