by Mike Morrison 15 years ago10 years ago

>So here is the infamous Marie Osmond story.

Two years ago, some friends and I went to cheer for Chris Jericho at the taping of Celebrity Duets. Chris is my friends cousin so we got some preemo VIP access, which allowed us to stick around after the taping to meet and shmooze with the celebrities.

I don’t know if you remember this show but it was basically dancing with the stars in singing form and one of the judges was Marie Osmond.

So after the show, while Chris was being interviewed by the press, Marie Osmond was milling about. My friend Tanya and I went and asked for a picture with the former teen idol. I thought I was looking pretty good, but I guess under the cruel studio lights Marie thought differently. Thus setting up the following awkward conversation:

me: “Oh hey marie, how are you?”
marie:”I’m fine. And you?”
me:”Oh I’m great! I used to watch your talk show all the time when I was home sick.” (meaning with a cold or any illness kids in middle school fake.)
marie:”Oh wow. That’s so nice. You are really brave. How are you feeling now?”

It becomes obvious at this time that she is refering to my bald head and pale complextion.

Said awkward pose is captured below: 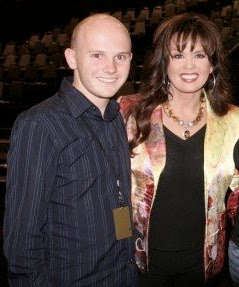 You can check out more pictures from backstage at the taping here.