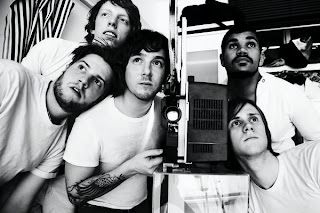 I’ve never really known what my purpose is life was. Was it to take over for Ryan Seacrest? Become a hoarder of Entertainment Weekly magazines? Aerospace Engineer?

I was all over the map.
That was until this weekend when I heard a new band at VirginFest. It was then I realized that my mission in life was clear. I am here on this earth solely to let everyone know about the amazing Canadian band, The Great Bloomers.
How did I know about these guys until now?
To give you an idea of how surprising their set during VirginFest was, the band was able to clear the media tent, which is not an easy task when you consider how cynical we actually all are. But no one could resist catching the band with the catchy and fun songs. Their songs, from their album that was just released in April, are the kind of songs that you don’t want to finish. You feel like you can sing along almost instantly. And that’s what I did when I checked out their website all day on Monday. (So guys if you noticed a surge of about 100 in your song plays that day, it was me!)
But I’m also obsessed with Taylor Swift, so I would understand your nervousness in trusting my musical taste.
Here is another review of the band that is worth the read. It’s good to know I’m not the only ones who are enjoying the band.
Please, do yourself a favour and give The Great Bloomers a listen (and re-listen). Right now my favourite song is Catching Up but it changes on a hourly basis.