The Globe and Mail endorses…. 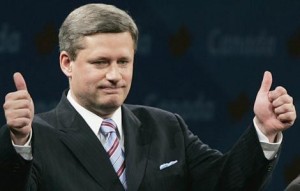 Are you surprised?Â  Or did you expect nothing less.

Here’s what the major Canadian newspaper had to say about the candidates:

Michael Ignatiaff: “His campaign failed to show how the Conservative government has failed, and why he and the Liberals are a preferred alternative.”

Jack Layton: “He has shown that a federalist party can make serious inroads in Quebec, but it has come at the cost of an unwelcome promise to impose provisions of Quebec’s language law in federal workplaces.”

Stephen Harper: “He has built the Conservatives into arguably the only truly national party, and during his five years in office has demonstrated strength of character, resolve and a desire to reform. Canadians take Mr. Harper’s successful stewardship of the economy for granted, which is high praise.”

The paper had nothing to say about Elizabeth May or Gilles Deceppes.Â  To be fair, they didn’t have anything to say Mikkel Paulson either.Â  What?Â  You do don’t know who Paulson is?Â  He’s the leader of Pirate Party of Canada.Â  Duh!