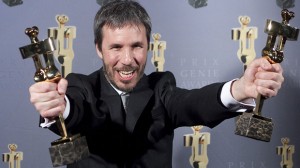 Okay, naming the Genie’s Canada’s Weirdest Awards Show is that shocking when we really only have a three or four to choose from.Â  But last night’s awards did feature a bevy of “why are they here?” reactions.Â  But we’ll get to that.

In news that surprised no one, the Oscar nominated film Incendies became the night’s big winner picking up a total of EIGHT awards at the ceremony in Ottawa!Â  EIGHT!Â  That’s huge! Naturally it picked up Best Picture but it also nabbed trophies for best adapted screenplay, best actress for Belgian Lubna Azabal, and direction for Montreal’s Villeneuve among others. Winning seems to be a trend for Villeneuve.Â  Last year he cleaned up at the awards show with his movie Polytechnique.

Coming in a close second was the other Oscar nominated Canadian flick Barney’s Version.Â  (Of all things, it was nominated for Best Make Up.)Â  On Thursday night it fared a little better winning seven Genie Awards!Â  Picking up awards were Paul Giamatti and co-stars Dustin Hoffman and Minnie Driver all scored prizes â€” best actor, supporting actor and supporting actress.Â  Sadly, none of them made the trip to Canada to celebrate with the cast.Â Â  Too bad.Â  It sounds like quite the party. 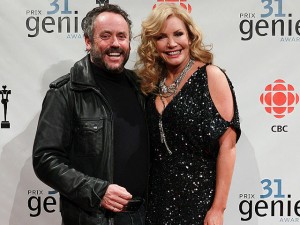 Those who did make it to awards show was a random group at best.Â  But it’s Canadian celebs, what do you expect? However the award for the best surprise duoÂ  of the night definitely went toÂ  former Dragon Brett Wilson who walked the red carpet with Shannon Tweed. Yes, Gene Simmon‘s Shannon Tweed.Â Â  I can only imagine what those two talked about.Â  And then I would charge you five dollars to tell you what I thought. Hot. Not to mention that Twilight star Rachel Lefevre shared the stage with William Shatner and performances by Serena Ryder, Melissa Etheridge and the Royal Winnipeg Ballet!

Ahh man, it looks like I missed quite a party!