The Genies announce their winners! 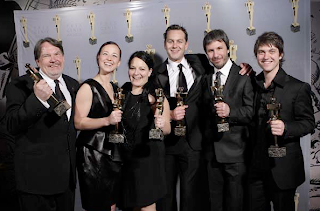 You probably didn’t know that on Monday night, the Genies were handed out in Toronto.

Let’s back up for a second, the Genies are the awards that celebrate the best in Canadian film.

Okay fine, the Genies are the Canadian Oscars. (I was hoping I would have to dumb it down.)

The night’s big winner was a movie you’ve probably never seen, but you definitely should.

The other big winner (and the night’s most notable star) was Joshua Jackson. The Fringe star won Best Actor for the film One Week. I’m also scared to watch this movie, because I’m terrified of any cross-country film that starts in Quebec and heads west.

Now before you go back to ignoring Canadian film, here is a list of all the winners!

Congrats to all the winners, here’s hoping you get at least the day off from your full-time jobs tomorrow.

PERFORMANCE BY AN ACTOR IN A SUPPORTING ROLE
MAXIM GAUDETTE – Polytechnique

PERFORMANCE BY AN ACTRESS IN A LEADING ROLE
KARINE VANASSE Polytechnique