The Fray are heading to Calgary! 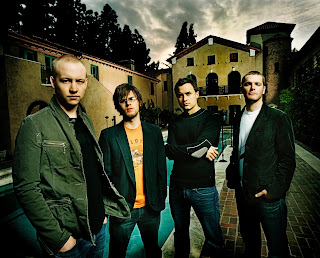 It was announced earlier this week that The Fray would be coming to Calgary on February 20th. And as far as I can tell, we are the only Canadian city they are visiting. I don’t know what we did to deserve such an honor, but I’m glad we did it.

I’ve been a fan of the Fray for a very long time, and I couldn’t be more excited that they are coming to play at the Jack Signer. Part of my excitement comes from the fact they are playing at an actual theatre this time. Last time, they were in town, they played at Mac Hall and it was super annoying. This time, they’ll be playing in one of Calgary’s nicest theatres!!!
Hearing that they were coming back to Calgary, reminded me how great their first album was. I still listen to the entire disc over and over again.
When I check my Itunes Top 25 Most played list, The Fray make three different appearances!
#1 Look After You (98 plays)
#7 Hundred (66 plays)
#24 Vienna (55 plays)
I think I have a problem. I did some rough math and figured out that I’ve listened to those three songs for a combined total of 14 hours. I don’t even The Fray has listened to The Fray that much.
Tickets for the show go on sale on Friday.
UPDATE: And yes, I’m aware that there is resemblance between myself and the lead singer, Isaac Slade.
UPDATE #2: Presale tickets going on sale today at 10am. Want the password? Try STAGE, or FOUND, or AMEX or 8003272177 That should do the trick!