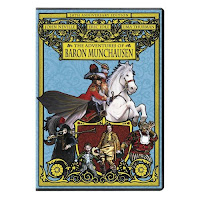 How about this for a flashback: The 20th Anniversary Edition of The Adventures of Baron Munchausen. Yeah I know…it’s been 20 years since one of the biggest flops in box office history came out. While it is technically classified as a “flop”, when I heard of it’s re-release I couldn’t help but flashback to the many weekends I spent watching this movie over and over again. I think the only three movies I watched more were The Sandlot, The Land Before Time and The Labyrinth.

I first discovered this cult classic when my mom joined Columbia House (remember that! ha!) and it was sent to us as a “directors choice”, if you didn’t return it, you had to pay for it. My mom always returned them, but for some reason The Adventures of Baron Munchausen got left behind. I think me or my brother opened it and it stayed in the VHS player for months.

Now, twenty years later, I honestly don’t remember much about this movie. I remember Robin Williams was in space and his head could come off. I also think the movie started in a theatre, like during a play or something. And that’s really about it. But as I was surfing the internet yesterday and I saw this movie was being re-released and i couldn’t help but be soooo excited!

And who knew that Sarah Polley played the little girl in the movie! Did you know that? Sarah Polley, of course, will always be known to every Canadian as Sara Stanley from Road to Avonlea. She bust onto the mainstream as the heroine in the remake of Dawn of the Dead and most recently she was nominated for an Oscar at this year for the script for her movie Away From Her.

So while the release date is still a couple of weeks away (April 8th), it doesn’t mean that we can’t start reminiscing about all of our favorite movies we used to know every single word to. And while they aren’t all the best movies ever made, they are definitely some of the coolest. And that is alright by me.

For now check out the trailer to see how much you remember: