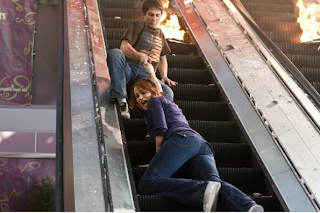 Last week I mentioned that The Final Destination (or FD 4) would be coming to theatres late this summer. Â Well New Line Cinemas just released the new trailer for it and it looks sooooo freaking awesome!!!!

One quick question: Would it be impossible that one day all four main characters from these movies would be able to talk and just explain how to avoid death? It just seems like it would be easier than them trying to figure it on their own each and every time.