The decline of COWS: Another childhood memory ruined. 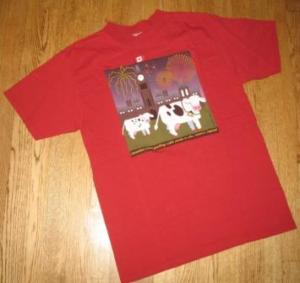 I can remember having more than one COWS sweater that my parents had to secretly throw out because I simply wouldn’t stop wearing them. Not only were they incredibly comfortable, the images on the shirts were almost iconic, especially growing up in the Maritimes. More than the Sears Wish Book, I couldn’t barely stand my excitement for the annual Cows catalogue that featured the new clothing that I would soon be clamouring for. I know most kids lovedÂ  COWS world famous ice cream, but for me it was the shirts with the oh so clever expressions parodying different parts of Canadian culture. Every design featured a cow doing or saying something that was just clever enough to make you laugh every single time you saw it. As a child, I remember after any prolonged period of time away from my friends, it was always so great to catch up with them and see who had what sweater.

Since I was a kid, the store has expanded around the country and this weekend, I happened into the store in Banff, part of me relished at the fact that I’d be able to re-live a crucial part of my childhood and hoped to find something funny to bring back to Calgary.

Now the shirts are not-so-clever on pop-culture brands that most people are sick of anyway. The Hunger Games is now “The Cow on Fire”, The Big Bang Theory becomes “Cowzinga”, Then there’s “Angry Herds”, “Mooey Griffen” and “Dairy Potter”.Â  Â  I will acknowledge that Justin Beefer is sorta clever, but that’s besides the point.Â Â  The shirts, which used to be a staple in my wardrobe have now become the tangible example of cheap jokes for a quick buck. If the tackiness ofÂ  Niagra Falls was on a shirt, it would likely be sold at COWS. It’s so disappointing to see such a strong Maritime brand lose its luster. Like the Wish Book, Cows won’t be remembered the way it should be, and that’s really why itÂ  really sucks to be a kid nowadays.