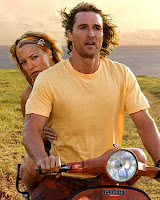 I’d like to think that I am a fair friend. I am very accepting and will usually let people get a way with a lot before I get myself worked up.

But every person has their limits. I would like to publicly announce that if anyone I know actually spends any more than $4 on seeing the new Kate Hudson/Mathew McConaughey project “Fools Gold” this weekend I will be done with you. Not just done, but over. No facebook, no texts, no blog shoutouts and I will even revoke the ever popular Christmas card.

I honestly can’t think of a single time in my life where I’ve hated a movie so much without having even seen it.

And I swear, if you go to see this movie and use the following adjectives to describe it I will hunt you down and do things that even Stephen King would be scared of: cute, funny, hilarious, smart, good or alright, not-awful.

If you don’t believe me, ask my friends Michelle and Cat who saw “The Holiday” 4 or 5 times in theatres. They haven’t seen their pets since.

I’m serious. This movie has 6% on Rotten Tomatoes, do.not.go.to.it. If this is not enough reason for you, how about the fact that in the trailer it says this movie is “worth it’s wait in gold!” OK, who didn’t just vomit in their mouths? Did you notice that it’s not a critic or anything saying it. It’s just a random line the studio added to the trailer, that’s because they couldn’t find one person to say something good about it. Not even a random paper like The Southwestern Denver Herald. Which I just made up, but you get the point.

There are TONS of movies out there that are better. Go see Juno again if you have to. Hell, I think Alvin in the Chipmunks is still in theatres.

So friends and family, this is my Deal-breaker. Choose wisely.