>Also available on my new best friend : The National Post’s The Ampersand 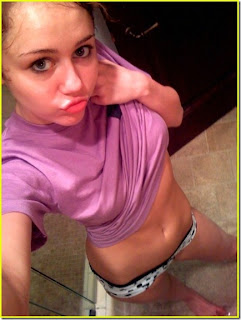 The last thing the world needs is another post about Miley Cyrus. After this one that is.

On my way to work this morning, Energy 101.5 played the next Miley single for her upcoming CD Breakout. The song is called 7 Days and the song tells the story of Miley reflecting on the her past relationships. When I first heard I thought to myself “oh great another song from this Disney star that just won’t go away. Then, when I got to my office and listened to the song a second, third and fourth time I became depressed. No, not because I’m sucker for a catchy tune, I’ve had to live with that addiction all my life. (“Hi, my name is Michael and I listen to crappy music.”)

What I became depressed was the state of 15 year olds. While everyone else will blame Grand Theft Auto IV, Judd Apatow and anything on The CW for forcing kids to grow up, I choose to blame the kid who still hasn’t grown up herself.

Since Miley is only 15 years old, I can only assume that Billy Ray is standing right beside her when she is doing all this kissing and intertwining. And while that may be the sort of thing they do in the Red States (and areas of Alberta), I still don’t think that her fans should be hearing and idolizing such actions. According to Degrassi: TNG, teenage girls got enough on their mind, now they have to worry about making out in the rain and falling in love all before they are allowed to go to a PG-13 movie (unless you are in Quebec)?

Look, I’m not stupid. I know kids nowadays know about things that I am still confused about. They are more aware of their surroundings and we can’t keep them kids forever. But what we can teach them is that we have to choose are role models carefully. Especially if they are related to Billy Ray Cyrus.