The CW is back…with a few others! 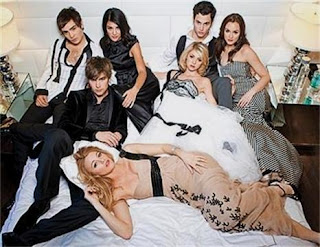 It’s been a long dull summer. Full of stupid shows like Nashville Star, that Dog show on CBS and America’s Got Talent. There was also the disappointment that was The Mole 3 that suffered from horrendous casting and the most obvious mole since Cindy Crawford’s!

But we can put that behind us now. The Fall TV season is finally upon us and with the writer’s strike yet a distant memory I can now look forward to doing what I do best, choosing my fake TV friends over my real ones. If you think about, my friends are the only ones that benefited from the strike that crippled the industry.

The CW is the first of the gate with all of it’s new shows and the rest of the networks following suit a couple of weeks from now. Today, we welcome back the return of Gossip Girl. And judging from the preview it’s definitely been a hot summer for our favorite NYC gang. Unfortunately One Tree Hill also returns tonight. Apparently we are supposed to care who Lucas picks. I just want to know who picks this soul-sucking show over shooting themselves in the face, because I would much rather do that.

Tuesday welcomes the premiere of a little show called 90210. I’m sure you’ve heard of it by now, it’s been talked about everywhere since it was announced a couple of months ago. If the pope got cable, I’m pretty sure he would be talking about it by now! While I don’t think this show is actually going to be any good, I am excited to hear about what Brenda and Kelly have been up to. And while Dylan, Steve, Brendan, David and Donna have all been holdouts, it is obviously only a matter of time. Meanwhile Andrea Zuckerman waits by her phone patiently. TVTropolis will be airing a 90210 marathon all day today if you want to catch up on your favorites! I am tivoing “Let Donna Graduate” and Brendan’s last episode.

Then on Wednesday we have the return of the increasingly useless America’s Next Top Model. Aside from appearing on the proceeding season, I don’t think I have ever seen a winner do any notable work. Curiouser Canada’s Next Top Model also returns this fall for it’s third cycle. Of course, Tyra is doing her best to seem forward-thinking by including for the first time ever a tranny model in the running. Hot mess indeed!

Later on I’ll be doing up a list of the all the shows, I’ll be watching and when they are coming back. If you don’t see your show there, then you shouldn’t be watching it!