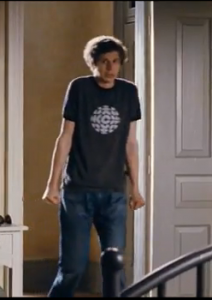 One of the coolest looking movies of the summer is the Toronto-filmed Scott Pilgrim vs. The World. After the immensely popular first trailer was relased a couple of weeks ago, the film’s director promised a second one when the Facebook page reached 100,000 fans.

Well this week it did and luckily the second trailer is almost even cooler than the first. Â But not for the reasons you think. Â Sure Michel Cera is cool, Anna Kendrick is too. Â The graphics looks awesome and I’m pretty sure the soundtrack will be astonoshing.

But what really makes this trailer awesome is the CBC. Â Well, more specifically the vintage CBC shirt Michael Cera wears in the trailer! Â It is only for a split second, but it makes it all worth while.

Now, how do I score me one of those shirts?!

Scott Pilgrim vs. The World opens on August 13th.