>What makes someone famous? At what point does someone go from regular guy to a celebrity? It used to be that only the biggest of TV or movie stars had the dubious title of being a celebrity, but living in the world of reality TV that we do, it seems that anyone can become the guy that girls run up to in bars and ask for their autograph or to buy them a drink.

Which brings me to my first Calgary celebrity encounter. Please remember that I am using the term very loosely. Like very very loose. Super loose. While celebrating my 25th birthday at the Atlantic Trap and Gill I noticed that singer Billy Klippert had walked in. Already you are asking who Billy Klippert is, well he finished in third place on the first season of Canadian Idol. Nothing? Maybe the picture will jog your memory. Having already enjoyed several beverages I walked right up to him and said, â€œHello, Mr. Klippert, itâ€™s my birthday!â€ To which he responded, â€œRight on byâ€™, happy birthday.â€
Without saying another word, I walked away confused.

Isnâ€™t Billy Klippert from Calgary? Didnâ€™t he just call me byâ€™? Why did he try to act like a newfie? Without wanting to ponder it any longer than I already had, I returned to my friends and mentioned who I had just run into. One of my friends got very excited and immediately reached into her purse and pulled out a brush and some make up. Could someone actually be that excited to meet Billy Klippert? She explained that she wasnâ€™t that excited, but she wanted a picture with him and if it was going to be posted on Facebook, she definitely wanted to look good for the picture.

This is what got me thinking about celebrities. Is Billy Klippert really a celebrity? Does his appearance on a dreadful Canadian reality show 4 years ago really justify a photo opportunity? Iâ€™ve been lucky enough in my lifetime to run into several pretty cool real celebrities. David Foster, Marie Osmond, Lucy Lawless are real celebrities. Sure they arenâ€™t A list, but they are actively working. They justify photos, Billy Klippert does not.

Either way my friend went down and got some pics with Billy. Who for at least the past four years has worn sunglasses on his forehead to cover his receding hairline. Billy, Iâ€™ve said it once and Iâ€™ll say it again, you arenâ€™t fooling anyone. The jig is up.

After some quick pictures were taken, Billy handed my friend his business card. Apparently he goes by Billy Klippert Inc now. How fancy. Also, should so-called celebrities be handing out their own business cards? So many questions, not enough rye.

Listen, Iâ€™m not making fun of Billy. Iâ€™m sure he is a great guy. Truth be told, Iâ€™m a little jealous. I did a government commercial 16 years ago and I still get teased about it. I just found it interesting that people were excited to see him. At what point does someone have to hand in his or her celebrity credentials? When does Billy go back to being a regular Calgarian who can barely afford rent? Ok letâ€™s face it, he already probably canâ€™t afford rent, yet girls still buy him drinks. Lucky bastard. 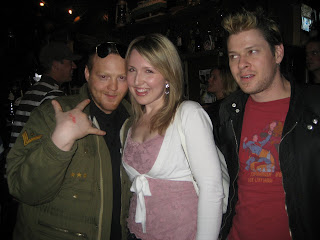