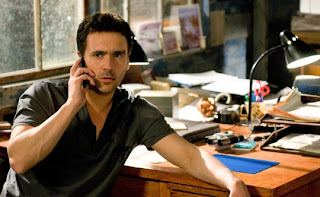 As we get closer and closer to spring, we are get closer and closer to finding out which of our favourite shows will be back for the fall. The show that is on my radar the most is obviously Being Erica, which if you ask me, will be back for a third season. The ratings are not great, but it is by far CBC’s most successful show south of the border. After all, can you name any other actors on Canadian TV shows that have been on The View and had their own billboard in Times Square? No, I didn’t think so. Being Erica and Erin Karpluk are safe…..I hope.

But even though it isn’t spring, it doesn’t mean that CBC isn’t already making scheduling decisions. It was announced on Friday that the network would be canceling the little-seen drama The Border. Meanwhile, The Rupublic of Doyle has been renewed for a second season.
No word yet on the rest of CBC’s shows, but I would say most are safe. CBC has been able to build a really strong base of shows, so there isn’t much wiggle room. The only “on the bubble” show might be 18 To Life, but even that show is getting stronger and appeals to the younger ($$$) demographics.
Stay tuned. Literally.