The battle of the moustaches! 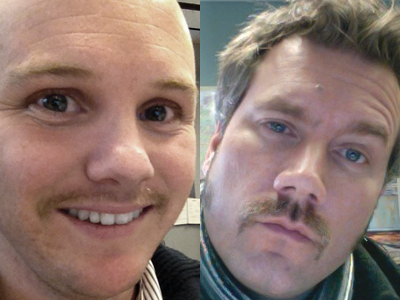 With just over a week to go in Movember, the moustache has FINALLY emerged from my face.Â  For weeks I was getting messages from people saying that I should be doing Movember, it was especially awkward because I was forced to explain to them that I was.

When the campaign kicked off, I asked Canada for nothing more than a dollar donation. I was hoping to gather $1,000 to help fight Prostate Cancer research.Â  And so far the fundraising is going really well, I’ve already raised $763!Â  Even celebs like musician Jill Barber got a little charitable and donated to my Movember page!Â  How cool is that?

If you wanna donate to my Movember cause, here is the link to my page!

Throughout the month,Â  I’ve also been challenging my editor at Metro, Darren Krause to a grow-off.Â  The rules have never been clear on what made the better moustache, but with only a week to go, it all comes down to the public vote.Â  Whoever gets the most votes will be declared winner, in a surprise twist, the winner will donate $250 to the loser’s cause!

If you want to vote for me or Darren, head on over to the Metro site and vote!