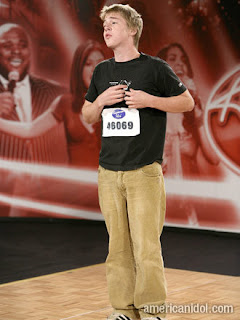 Last night while watching the first night of Hollywood week on American Idol, I made fun of Josiah Leming. OK, I made fun of him a lot. While everyone was falling in love with him, I just didn’t get it. Plus why did he cry so much? Hell, he makes me look like a brute of a football player. And when he asked the band to leave the stage? Puhlease! But people loved him anyway, my roommate stopped short of getting a “Josiah 4eva” tatoo.

So today I decided to see if I could figure out more about this guy. As soon as you google his name his myspace music page comes up. How a kid who apparantly lives in his car has a myspace page is neither here nor there. But I decided to listen to Josiah anyway and honestly? I listened and listened to the 4 songs he has posted over and over again. All afternoon really. They are so good and his voice is so strong. And he doesn’t cry once during any of the songs.
So I’ll admit it. I was wrong about Josiah. After listening to those songs I have no doubt in my mind that he deserves to be in the Top 10 in what is actually probably going to be one of the best Top 10s ever! On his page you can listen to “To Run”, which he sang on his audition, but my favorite is “They Say”. His voice is ridiculous on it. Heck maybe i’ll even join his facebook group!
Remember this day people, I admitted I was wrong. It doesn’t happen often (or at least I don’t admit to it often). Now let’s just hope Josiah makes it to the Top 24.