My friends and family hate that I never tell them what I want for Christmas. Instead, I make a secret list and then get mad at them on December 26th for not asking or finding said secret list.
(hint: it’s always in the same place, behind my blu-ray player)
Anyway, I’ve finally decided to make my list public. However, this year it will also feature gifts that I think I would hate, but I actually might like, because I can’t make it too easy. It’s up to you to decide.
Let’s get started.
Remember when CLUE used to be a simple board game? Sure, I was never patient enough to find out who the actual murderer was, but still, it was good times. It’s recently been updated and well, I don’t like to swear, but what the fuck is Clue: Secrets and Spies? Well, whatever the hell it is, it has a trailer and requires you to use your cell phone. Check out the trailer.
What have you done Hasbro, what have you done indeed?
While we are talking about weird updates of the Clue board game, again, what the fuck is this: 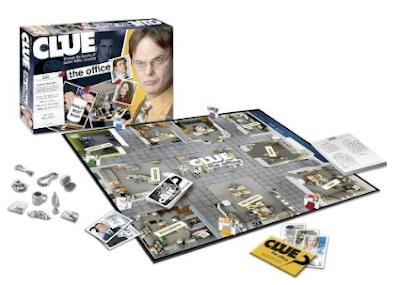 An Office Clue Board Game? It’s not really fair because we know that Michael is too stupid to commit murder. And wouldn’t Dwight always end getting murdered?

I thought I hated both of these games almost immediately, but now that I think about it, I think I might love it. How is one to know?
Do you hate or love? Should I ask for it for Christmas?