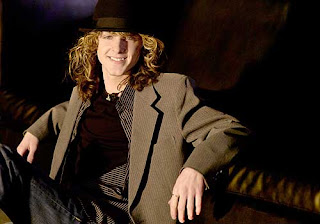 Yes! The best of the best is finally here. Now let’s watch them collapse under the pressure.

David Hernandez is good and I honestly donâ€™t know why the judges give him such a hard time. Granted I think he went to the school of Carrie Underwood Stage movement, but I hope he doesnâ€™t fall victim to the dreaded â€œthe first spot of the night forgetful nightâ€.

Chikezie is now down to one name. He is like Mandisa and Fantasia now. Wellâ€¦except for the whole penis thing. This guy is really coming out of nowhere eh! This is great because he is so likeable. I actually got a phone call during his performance and this silly hotel doesnâ€™t have TIVO, but from I can tell he is in no trouble of going home on Thursday.

David Cook: I have decided that from this point on dear David will be referred to as Bed Head. Itâ€™s hair like his that makes me happy to be bald. I thought his version of â€œSo Happy Togetherâ€ was pretty good. It was at least different than Edwin McCain and Brian Adams, which I thought for sure he was going to pull out. But for my money, Iâ€™m looking for more rock from our rocker this season!

Jason Yeager Moonriver? Seriously? OK. Iâ€™m not going to let this happen all season. American Idols listen up. The people that vote for this show are 14 years old. Not 84. Please put an end to this awful 40 year old ballads. Letâ€™s keep the songs to the 90s unless other wise specified. Also, I canâ€™t be the only one that is concerned how much Jasonâ€™s son looks like him. Thatâ€™s just weird. But well played on the â€œdead-grandmaâ€ song.

Robbie Carrico once toured with Britney Spears! How did we not know this! On top of the whole Britney thing Robbie seems pretty good and itâ€™s a shame we didnâ€™t see him more before now. Especially because he hauled out the Aimee Mann! Right now, Robbie is number one in my books. Plus he gets points for being the first for Paula to hit on

David Archuleta. According to EW David is the one to beat but Iâ€™m not too sure. I think that in two or three years this kid could be huge. But for now he is just thatâ€¦a kid. And his song is a prime example of poor song choice. While Iâ€™m happy that he choice an up beat song, didnâ€™t it seem like the background singers were out singing him? But apparently the judges donâ€™t agree with me? Even David seemed surprised! But heâ€™ll be fine for this week. Try better next time kid!

Danny Noriega is in the running for the most annoying male. Right behind goody goody David. Although I feel like America (and Simon) might think differently. But if his version of Elvis isnâ€™t proof enough, they should keep this kid around cause I really think he might be able to some amazing things! Plus I feel like his mom is going to the crazy parent to watch this season!

Luke Menard is another unknown. So much so that they didnâ€™t even have any Hollywood Week footage. And after his song itâ€™s pretty obvious why. I hated this audition. His voice was awful. I canâ€™t even watch Simonâ€™s reactionâ€¦.where is my Big Brother 8?

Colten Berry is another unknown from the past 7 weeks. And he even rivals David Cook for the Bed Head award. I liked Davidâ€™s version of Suspicious Minds, I really thought it showcased all of his different vocal styles. But we already have two 18 years old and I think that Colten might just fall through the cracks.

Ughâ€¦who is this Garrett Haley guy. Iâ€™m honestly having a hard time caring about these guys weâ€™ve never seen before. And donâ€™t these people have stylists? Cut.his.hair! But at least he has one of the more original voices and his stage confidence is better than those 10 years older than him (cough luke cough). Although someone really has to do something about his â€˜stache. Yikes.

Jason Castro is yet another example of American Idol becoming the year of the bad hair. Yikes. Dreadlocks? Really? Although he does gets points for playing the guitar. But maybe he is too folky for American Idol, but I think he needs to stay in the competition just a little bit longer. Because Paula was right when he called Jasonâ€™s performance effortless. After all, can any other guy play an instrument?

Finally we get to see Michael Johns! Itâ€™s about freaking time. Is there any way he can just sing Bohemian Rhapsody again? Is that too much to ask! I honestly donâ€™t know what Michael will do to not make it to the finals? He is definitely the most talented and most likable of the male Idols.

So who is going home?