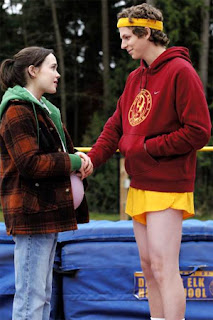 Teenagers are confusing. They always have been. Even when I was one I still had no clue what was going on. I was just along for the ride waiting for the sweet peacefulness that turning 20 brings.

In a city that is still in the middle of a population boom, Calgary teens are everywhere. They are unavoidable like rush hour car accidents and a Conservative Albertan government. So when my friends and I go to the movies we know that unless the movie is about something â€œimportantâ€, we will most likely have to deal with the ever hormonal 13-19 age range that terrorize malls and still self-conscience writers all over the country.

On this particular evening my friends and I decided to check out the much buzzed about â€œJunoâ€ featuring two of Canadaâ€™s brightest stars Ellen Page and Michael Cera.

The quirky movie tells the story of a 16 year old that accidentally gets pregnant and must make important decisions about both her life and that of her unborn child. While it might sound a little â€œmade for TV-ishâ€, it is actually a wonderfully smart movie that is a true showcase for the Halifax native Page who is set to become one of Hollywoodâ€™s brightest stars. Which, if we are going to be honest, is a very small pool right now.

But you donâ€™t need me to tell you about this movie. Thatâ€™s what the Entertainment section is for. What I want to talk about are the two teenagers that sat beside me during this movie.

Now call me crazy, but if I was a teenager watching a movie about an unexpected pregnancy the last thing I would want to happen is be touched by another human. I would be terrified. I mean this movie doesnâ€™t make pregnancy look easy or glamorous. It is a surprising real tak 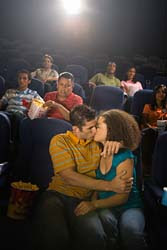 e on how life changing it can be to have a child. Yet, Dawson and Joey sitting next to me were definitely not heeding the warning that is Juno. They were going at it like they had swallowed each otherâ€™s Ipods.

Then again maybe itâ€™s me? Iâ€™m 25 and I am still unsure about the concept of children. Iâ€™m that guy that still gives his married friends the sympathetic arm rub when they tell me their pregnant. I avoid Market Mall during the day when the strollers out number the cars in the parking lot. And donâ€™t get me started on children at restaurants that have menus.

But are teenagers really so perverse that they actually get their rocks off on a movie about teenage pregnancy? Have they no shame? In my experience, that is romantic comedies and horror movies exist in the first place. Or so my friends tell me.

One thing you learn as you get older is that everything has its time and place. And while I can appreciate that maybe a dark movie theatre is the only place they can get some alone time. I donâ€™t think I should have to listen to it. That is why places like The Foothills Industrial park exist. Please let us geezers watch our movies in peace.