Taking you for a ride…hybrid style! 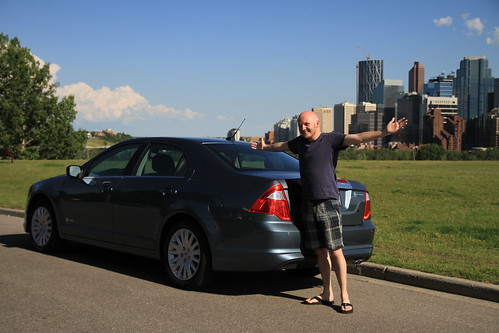 The mission was simple. How much could I do with a Ford Hybrid Fusion and only one tank of gas. The challenge was asked of me by Ford Canada and yes, I GLADLY accepted. The difficulty would be that the timing happened to fall on the August long weekend, which meant that I would want to do a LOT of stuff. So I packed up the car, grabbed my friend Krista, turned on Howard Stern and headed out to Canmore for what I knew was going to be an amazing weekend. 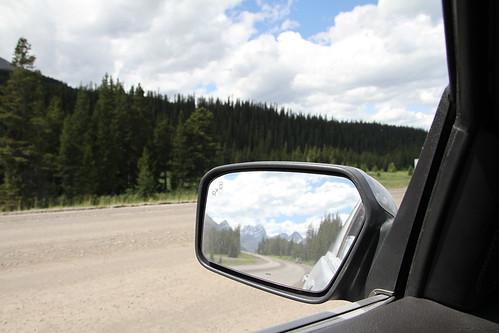 But almost immediately we had to put the breaks on the trip! We got to Canmore only to realize that I had forgotten my wallet back at my place.Â  Anyone that knows me, also knows that this is not a surprise. We drove back to Calgary, grabbed my wallet and then (and finally) head back to Canmore…hey, if you’re going to test out a car, you gotta do it right. (Fun fact: That extra drive still left us with more than three quarters of a tank.)

The thing about this trip is that I already love my car that I have now. Iâ€™ve had it for two years, and weâ€™ve developed a very special relationship. So before I did anything with the Ford Fusion, I knew I would have to personalize it. 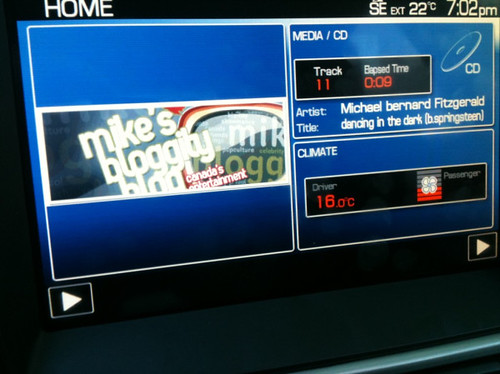 Ahh there we go.

With nothing but the open road ahead of us, I was excited to explore the town of Canmore and more importantly, get a chance to check out the much talked about Canmore Folk Festival.

Before the festival got started, Krista and I thought the best way to explore Canmore, would be to do it the same way the city’s founders did all those years ago, on horse back. We drove up to Cross Zee’s lodge and got the most brilliant private two hour two with the owner Jim. As our horses Target and Winnie twisted and turned through the woods, we were treated to spectacular views of the mountains and Jim provided some great stories of his family run business. 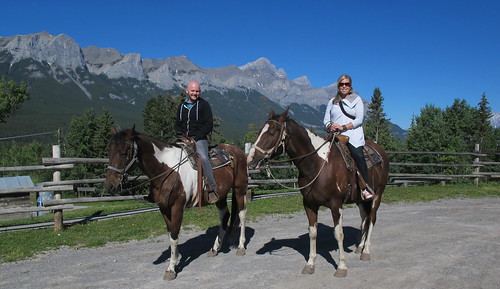 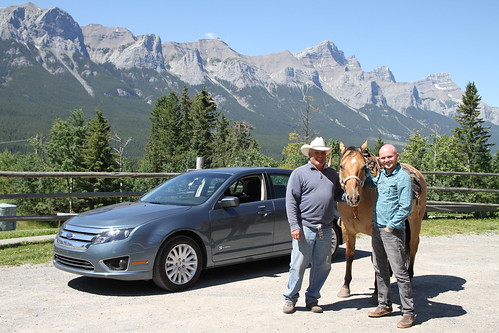 After the horseback riding, our legs were in need of some serious relaxation, so we headed down to the grounds of the Canmore Folk Festival and took in some really great music. It really doesn’t get any better than listening to Joel Plaskett, Michael Bernard Fitzgerald, Samantha Shultz, Elliot Brood and Layten Kramer, in the sunshine with the mountains as a backdrop. 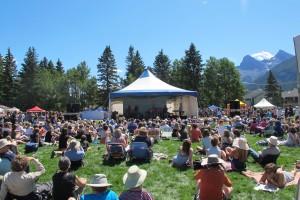 In between exploring the city and listening to music, we thought it would be a blast to explore the mountains- off roading style. We headed up in behind Canmore and went down the 742 south, a gravel road with stunning lakes and amazing mountains on either side of it. For a new car, I knew I was showing it something that most urbanites would never dare to. 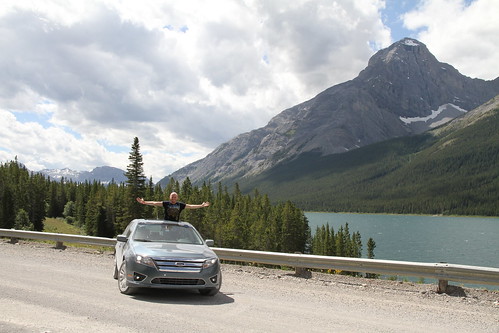 While we exploring the back roads, I wanted to make sure I visited a lodge that I have been hearing a ton about, it’s called Mount Engadine Lodge and to say it was amazing was an understatement, it was so great that it’s going to have its very own blog post, so stayed tuned for that! 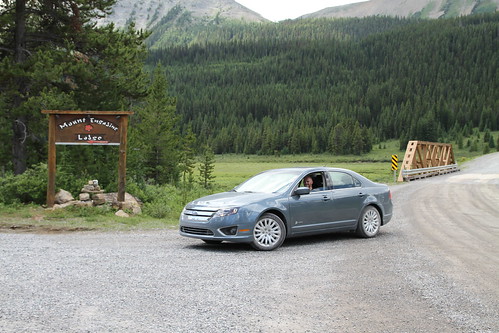 During the exploration of the back woods, The car may have gotten a little dusty but what fun is a road trip if you can’t get it a little dirty, right? 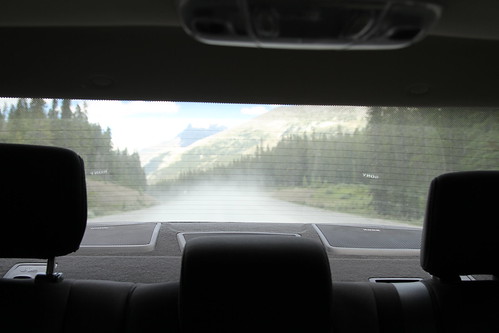 But that didn’t mean I didn’t still leave my mark: 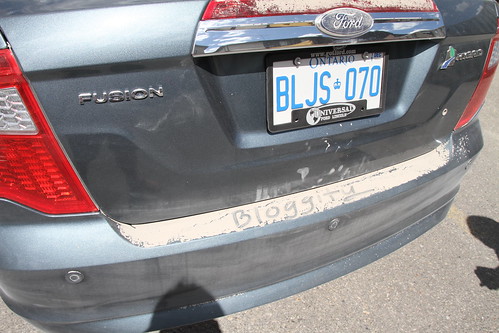 While Krista and I have been friends for years, we did love running into some old friends along the highway. Not literally of course, that would be terrible. These are the kind of friends that are so awesome, they can stop traffic…and do. 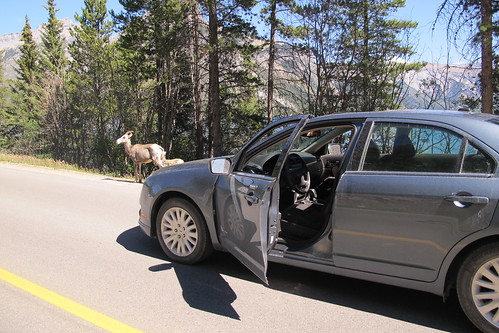 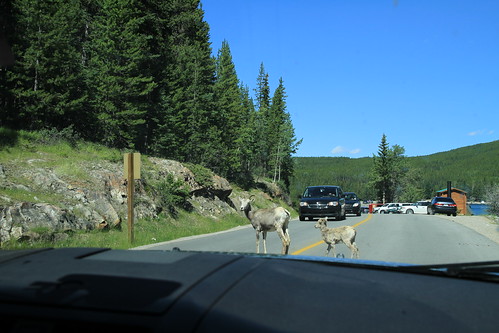 This was my first time getting a car to test drive, and I like to think it was as fun for the Fusion as it was for me. We certainly drove it in lots of different environments, from the city to the highway, dirt roads and steep mountain inclines. It was easy to figure out and felt like I had been driving it my whole life within a matter of minutes.

The fact that it was a hybrid was even better. We drove that baby for four days straight and only when we came back to Calgary did it dip below a half a tank of gas. HALF. A. TANK. If you weren’t a believer in hybrids before, you need to start thinking about it.

I have to thank a lot of people for making this weekend possible: Ford Canada, The Georgetown Inn, Silver Creek Lodge, Tourism Canmore, Canmore Folk Festival and Cross Zee’s Ranch. It was such a great way to celebrate everything that is awesome about this country! 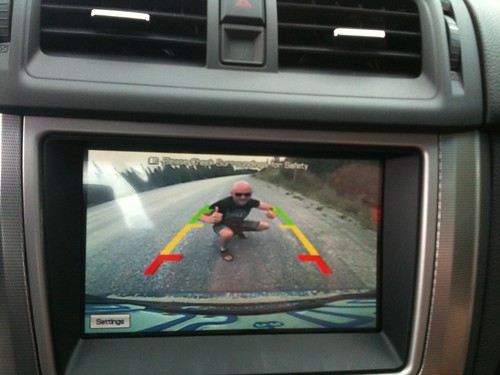