Taking on one of the summer’s trendiest sports!

Before this whole ice bucket challenge thing,paddle boarding was definitely in the running to become the trendiest thing involving water this summer.  No doubt you’ve seen dozens of people happily bragging about taking on the sport which has undoubtedly picked up a lot of momentum in the past few years, but not in that annoying CrossFit sort of way.

So, when I was planning my recent trip to Prince George, a city that is overwhelmingly popular with outdoor enthusiasts looking for both summer and winter activities, I decided that it would be the perfect place to see what all the fuss about. 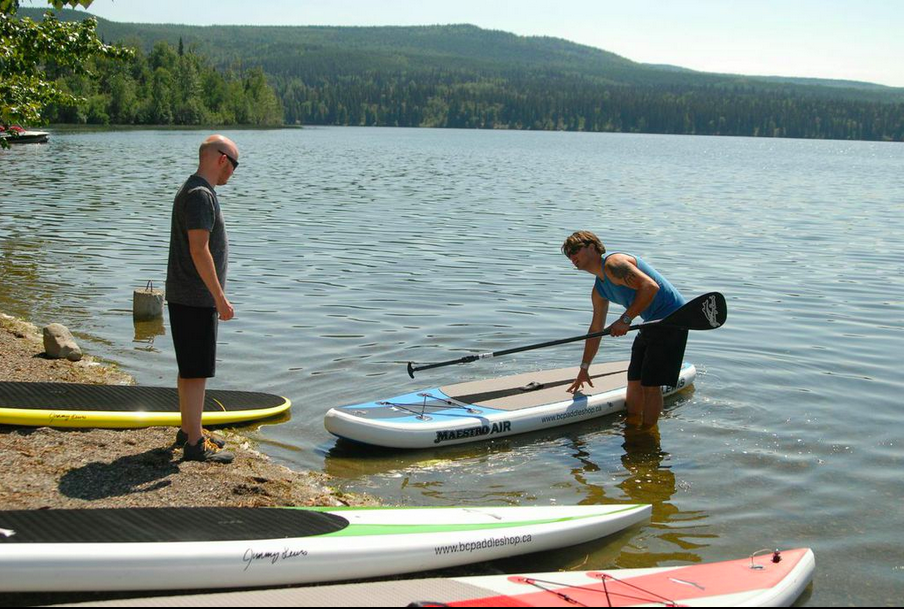 On a perfectly sunny and still day, I met up with Andy and Liz from the BC Paddle Shop.  Andy was definitely one of those aforementioned PGers, who’s found haven in the northern BC town.  In the summer, he specializes in all things water, including paddleboarding and rafting and then in the winter, like it was nothing, he offers guiding in mountain sports like heli-skiing. Because of his experience in pretty much any cool sport that exists, he had the air of someone who would be both a patient and excellent teacher, which is pretty much a requirement for me when I’m learning anything.

On this particular afternoon, we set up on the banks of the Tabor Lake, one of just many places popular with those mastering the relatively new sport.   Whether your wanting to practice on a lake, or take the challenge of floating down a river, Andy said that the area offered up the pick of the litter in terms of those looking to get wet and have fun. There, on the banks of the Tabor Lake, Andy and Liz had laid out five different paddle boards, offering up a range of difficulty.  Since it was my first foray at the sport and knowing that I had already several unsuccessful attempts at surfing, I decided to start easy. 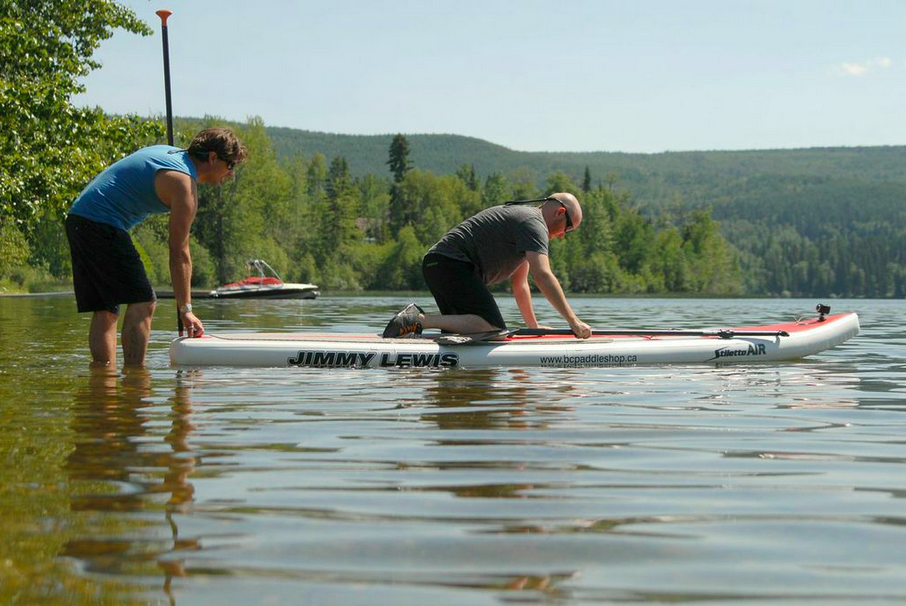 I couldn’t have been happier to head on to the water with Andy and Liz. I’m sure I’m not the only one that gets nervous when they’re trying something new, let alone when you’re doing it doing by yourself with instructors that you’ve never met before.  But they both had a way of feeling that they were your fast friend, so as the day went on, I felt more and more comfortable trying the different boards.

I’m not saying I was some sort of paddleboard protégé, I just quickly realized, what was the worst thing that was going to happen? I was going to fall into a wonderfully refreshing lake?  I’d laugh and pull myself back up. If that’s the worse thing that was going to happen, I definitely didn’t have anything to be scared about. Once I got rid of that fear, I got to see what people really enjoy the sport. I think I progressed quickly because I felt really comfortable with Andy. He pushed me to try the boards, but in the way a big brother might encourage a little brother, which was weird because I’m pretty sure I’m older than, but hopefully you get the metaphor. 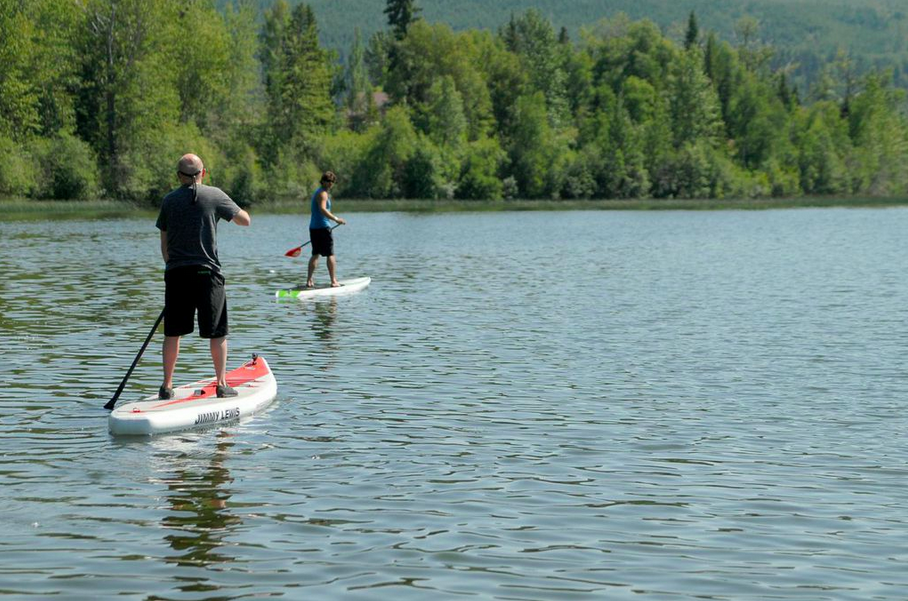 After a few hours of boarding around a few different corners of the lake, it was time to head back to shore for the delay.  But that tingle of enjoyment from a day of learning about a sport that everyone else seems to love was unmistakable. I can still feel it now.

It only took a few hours to see the reason paddle boarding is really taking off as a sport. It’s because it’s one of the rare sports that anyone can do after just a few minutes of instruction, especially if you realize that you have nothing to be scared of. Sure, you might not be able to navigate the strong currents and obstacles during your first few times, if the water is calm and so is your mind, than it’s actually quite easy. Okay, maybe not super, super easy, but relaxing for sure. And when it comes to me and sports, that’s all I can ask for! 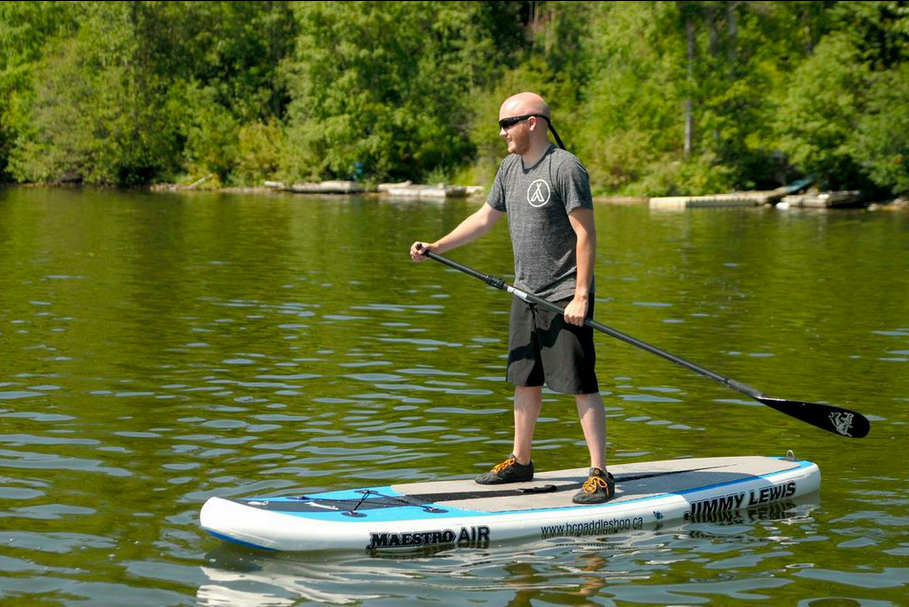