Taking a bite out of Eat St.

I often tell people that having lived in Calgary for the past seven years, it actually feels like I’ve lived in two different cities. Calgary has grown and developed so much since I moved here, I sometimes have to remind myself that I’ve actually never left. That change is perhaps no more evident then in the way the city has become a bustling hub of restaurants and photo-taking foodies. Â More specifically, this city’s food trucks. Â Since launching last year, the city’s food trucks have been garnering international attention and will culminate tonight when Calgary’s meals on wheels make their debut on Food Network Canada’s food truck series Eat St.

Hosted by James Cunningham, the series travels around the world looking for the very best dishes that come from a vehicle. Â If you haven’t eaten from a truck before, you’re definitely missing out. Although, that being said, many don’t even come close toÂ rivalingÂ the tasty street meat of many Toronto vendors. Â What? Â I really like hot dogs. 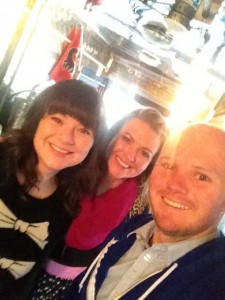 When the show returns tonight and in the coming weeks, it will feature three of Calgary’s most popular trucks including Perogy Boys, Alley Burger and Fries n’ Dolls. Â I actually got to sample some of the Fries n’ Dolls first fries of the season yesterday morning and they were as tasty as ever. Â Actually, I’ve eaten at all three of these trucks and they are definitely contributing to my expanding waste line, not that I mind.

This season, the show will feature more than sixty trucks, including some from as far away as the UK. Toronto trucks will also be heavily featured this season, includingÂ Caplansky Deli Truck,