The bad luck of Matsing finally came to an end on last week’s Survivor. Sorta. The tribe of two was absorbed by the show’s other two tribes.

Not that it helped Penner’s Kalabaw tribe, which thanks to illness and their first lost at an Immunity challenge, lost two of its tribemates.Dana Lambert took herself out of the game, after seeking medical advice. (It turned out to be extreme dehydration.) And Sarah Dawson found herself to be the first person voted out of the Red Tribe after she revealed to Jeff Kent her dangerous little secret.

Here’s my interview with both castaways.

How surprised are you that getting sick was what took you out of Survivor?Dana: Really surprised. I like to think that Iâ€™m a pretty tough girl and to be taken out of the game like that really tough. I didnâ€™t think Iâ€™d be the best at the challenges, but I thought my social game was good.

Were you feeling comfortable in your alliance?

Were you surprised by how nurturing Penner was when you were sick?
Dana: I was pretty surprised. I mean, heâ€™s a pretty nurturing guy. But thereâ€™s no doubt about it that Pennerâ€™s playing his game and he was maybe even a little excited that I left the game. At that moment, on that island Katie and Dawson were amazing, they were really sweet. And that was just what I needed until medical attention arrived.

Did you get a chance to talk to Dawson about leaving?
Dana: No, we got back from the challenge and I got under the tarp and the pain starting getting worse and worse and I just laid there and cried. 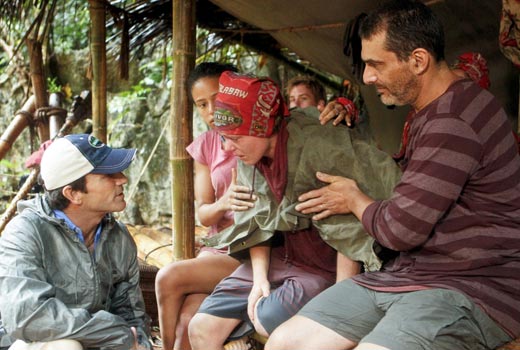 What advice would you have given Dana if she hadnâ€™t gotten taken out so quickly?
Dawson: Well, everything happened so quickly, we didnâ€™t even know that medical was coming out to see her. But once that all started happening, our tribe wasnâ€™t really privy to the conversation between Medical, Dana and Jeff Probst. We came out on the beach and it was already happening. There was no time for me to actually talk to her and determine if she was willing to stay. It all just happened so fast.

Would you have convinced her to stay?
Dana: Oh I would have tried! I definitely would have tried. It didnâ€™t come across to me that she couldnâ€™t stay a few more hours. If I knew that, I would have asked her to stay. But knowing how horrible she felt, I was just thinking about that the entire time. I understood her wanting to leave, there was just no opportunity for me to ask her. It would have been a little selfish.

Itâ€™s been a couple of months, are you happy with your decision to leave Survivor?
Dana: Not that Iâ€™m happy with my decision, I would have loved to have stayed. But at that exact moment, I just really didnâ€™t have it in me. Iâ€™d been sick for a couple of days, it was the only decision I could have made.

How surprised were you when you saw professional ballplayer Jeff Kent on the beach?
Dawson: I saw him a little bit before the beach, because we take cast photos and things. When I first saw that it was Jeff Kent, I was pretty amused. I know that Survivor likes to throw wrenches in the game and into your calculations. You have your strategies, but your secretly playing with an MVP baseball player! I was really, really excited that the producers were able to pull off another professional sports player. I thought it was a huge advantage to me. 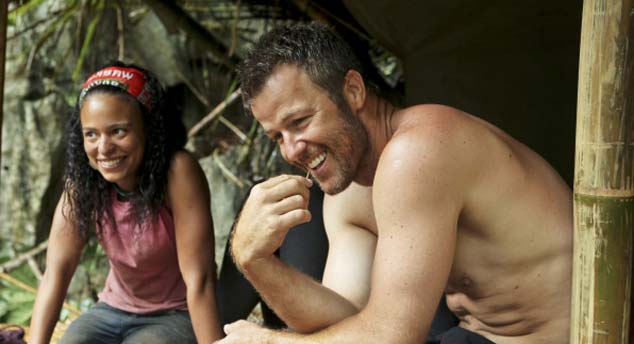 Do you think you miscalculated that advantage you had?
Dawson: No, absolutely not. It would have been extremely helpful once the merged happened, then, if I had gotten voted out, I would have been on the jury, so he really would have been blackmailed by me. Unfortunately, I discussed with him that I recognized him and he viewed that as, â€œI need to get her out.â€ It would have been stupid to keep me until the jury because I would just tell everyone who he was. He made a good move.

How was Matsing’s Denise able to build a bond with the guys on your tribe so quickly?
Dawson: I think once we lost Dana, the guys pretty much knew we had a womenâ€™s alliance already happening. Denise started making some moves and found that the stronger alliance was with the men and thatâ€™s the one she wanted to stick with.

Did you always plan on making â€œyour moveâ€ on Jeff Probst?
Dawson: Yes! Before I left home, I told my mom that if I got an opportunity, â€œYou better close your eyes, because Iâ€™m going after Jeff Probst!â€ For years, I had dreamed of being on the show and on top of that I get to â€œsneak one in.â€ It had been planned for years!

Since it is the season of returning players, if asked, would you come back?
Dana: Absolutely. Never say no to Survivor.
Dawson: Iâ€™m trying to go back right now! Iâ€™m waiting to apply again.

Can you apply again?
Dawson: Iâ€™m going to try, all they can say is no!