First it was Matsing that couldn’t win a challenge. Now it seems to be the Kalabaw tribe, who’ve yet to win a Immunity since absorbing one half of Matsing. (Denise has never won an immunity challenge, as anyone else noticed this?)With the men of Kalabaw picking off the women one by one, it was hard to manage Katie Hanson making it to the merge, which is likely why she wasn’t too surprised when she was voted out last week.

I caught up with the Survivor castaway who made it to Day 16 of CBS’ addictive reality show.

After you got voted out, you talked about the difficulty of the challenges. How hard are they?
Katie: Itâ€™s so easy to sit at home and say, â€œOh, I can do that.â€ You know, I could show you my performance at the gym and youâ€™d think I could do it. But itâ€™s a different world out there. Youâ€™re stripped of food, youâ€™re stripped of the water that your bodyâ€™s used to taking in. My body just didnâ€™t perform the way it normally does. Itâ€™s disheartening to watch on TV because I know what Iâ€™m capable of. But at the same time, but this game is hard.

What did you do to prepare?
Katie:For me, I thought, Let me put on weight, because it makes sense to go in with extra belly fat. And I think that was probably not the smartest move. I think putting on that extra weight made me out of shape for the challenges. If I could do it all over again, I wouldnâ€™t have focused on weight gain.

Was Jeff picking on you during the challenges?
Katie: You know, itâ€™s funny. I probably heard him once when I was terrible in that one challenge. But I didnâ€™t hear him at all in the challenge where I had to catch the ball. Did he add that in? I donâ€™t know. If did actually say that, then, yeah, it definitely molded the minds of my tribemates. 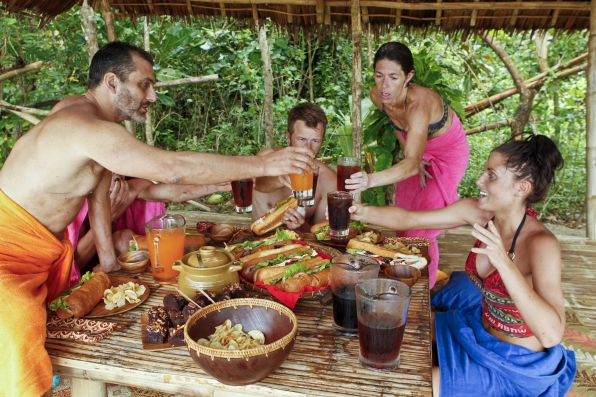 Did you go back to your camp and talk about what Jeff said?
Katie: We never talked about what Jeff said. Youâ€™re really not paying attention to him, your main focus is to get through the challenges and try to win. The last thing youâ€™re focusing on is what Jeff is saying.

Did you guys try to get Denise in you womenâ€™s alliance?
Katie: They didnâ€™t show this, but before Dana got sick, she definitely agreed that she wanted the woman. She was just going to tell the guys that she wanted to be with them, but really she would be with us. But then, all of a sudden, Dana started getting sick. And I knew I was going to lose Denise, because it didnâ€™t make sense because we didnâ€™t have the numbers. She did what was best for her and good for her.

Of the three returning players, were you happy to have Penner?
Katie:Penner was the villain that returned. He was the biggest threat because it was his third time at this game. Heâ€™s already learned so much about how the game works and whatâ€™s going on. So he was definitely a threat. He went around and made alliances with every person on that island. How much can you really trust someone doing that? But living with him, he was joy to live with. You take the good with the bad. I was really happy he was on our tribe.

When did you find out Jeff Kentâ€™s secret?
Katie: I found out as soon as I was voted off. Dawson came up to me and told me that he was a pro ballplayer. And for some reason, I didnâ€™t know that. I didnâ€™t believe her. But as it turns out, she was right. Itâ€™s weird to think that I lived with him for 16 days and I had no clue. 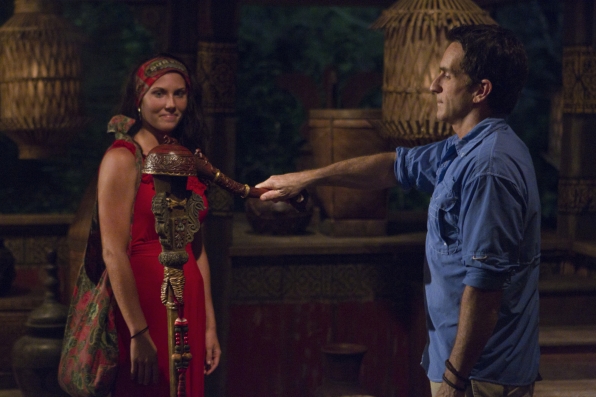 Is it fair for a millionaire to play the game?
Katie: If he had aired his dirty laundry, he wouldnâ€™t have made it to this point because who wants someone, whoâ€™s already made all this money, to succeed at this game? If he makes it to final three, I donâ€™t know who in their right minds will vote for himâ€¦if they know his past.

Does it matter to you who goes home on the other tribes?
Katie: Yeah, because there are certain people who survive that surprise you. At the camp, we try to guess who is going home and then when we come back and we start to see the dynamic of the group. Everyone looks, everyoneâ€™s curious.

Would you go back?
Katie:100% I would do it again. It blew being a pageant girl out of the water. This is the ultimate test of your will, it shaped me into the person that I am today. Iâ€™m just so grateful to be have given this opportunity. Itâ€™s unreal, Iâ€™m still baffled at the fact that they chose me.