If you thought the returning players on this yearâ€™s Survivor would be kind to their loved ones, well, youâ€™d be wrong, very wrong. For the third week in a row, the Tadhana tribe, which features returning playersâ€™ loved ones, was soundly defeated, thus sending John Cody to Redemption Island. Earlier in the episode, Rachel Foulger, girlfriend to Tyson Apostol, lost the Redemption Island Duel to Marissa and Candice and was the first loved one sent packing.

How did you end up on this season of Survivor?
Rachel: As you know Tyson has been on the show a couple of times before and when they decided that they wanted to do this loved ones season, they thought about Tyson and knew that I was his girlfriend and asked if I was interested.

Was it an immediate â€œyesâ€ or did you have to think about it?
Rachel: Oh I had to think about it, for sure. The very first time CBS called and asked me, my heart just dropped into my stomach. I was nervous, I didnâ€™t know if I could do it. Just watching Survivor, itâ€™s a tough show. But as time went by, I got more and more excited. How many couples get to play Survivor together? And the chance to win a million dollars is awesome, so we decided to do it!

Who were you excited to play with?
Rachel: Well it was kinda cool to see Rupert and see what heâ€™s really like. Other than him, I wasnâ€™t really familiar with any of the other players.

Did Tyson have advice for you going into the game?
Rachel: He gave me just a little bit of advice, which was about my social game and getting along with everyone. He told me to make sure that everybody liked me, because the social game is so huge. Unfortunately it didnâ€™t work for me, because they pulled the old switcheroo and send me to Redemption Island, hoping to get Tyson out of the game. 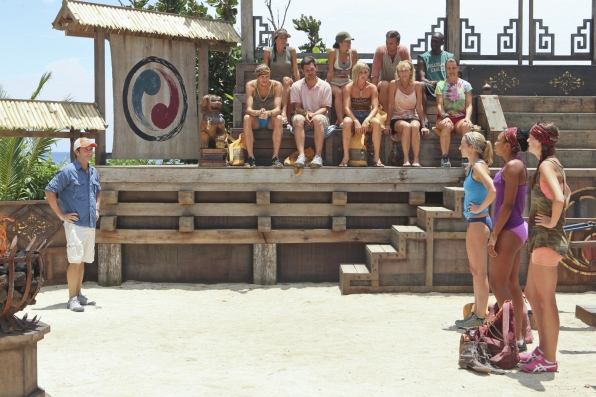 Did you think their plan would work?
Rachel: No! I donâ€™t know why they didnâ€™t casually ask, â€œwho would switch with their loved one, would Tyson switch with you, Rachel?â€ They didnâ€™t do any research and there was never a doubt in my mind that Tyson wouldnâ€™t switch with me.

So you werenâ€™t surprised when he didnâ€™t switch?
Rachel: Not at all, that was my plan from the beginning. I had a lot of time on Redemption Island to think about it and I decided that I wasnâ€™t going to switch with him.

I wanted to ask you about Redemption Island. What happens there?
Rachel: Not that much really. Thereâ€™s not really an aspect of the social game because weâ€™re not voting each other out. So itâ€™s a little more real and we can really speak our minds. It was just us girls that were targeted by the male alliance, so we talked about that a little bit. Thereâ€™s really not a lot to do.

What did you think of Melissaâ€™s reaction to Brad Culpepper?
Rachel: Oh I loved it! Loved it! I was dying, it was so hilarious because he deserved it. He still has Ciera and Katie in the game and heâ€™s mad that heâ€™s still losing challenges, heâ€™s voting out the strongest players, what are you doing? Marissa had a good point, she said, â€œIâ€™m on Redemption Island and I donâ€™t even know what Iâ€™m redeeming myself for?â€

Out of the three people on Redemption Island, who are you rooting for to come back?
Rachel: Iâ€™m kind of rooting for Marissa, because she was the first person voted out. I didnâ€™t want to write her name down, but I had to go with the majority on that one. So Iâ€™m rooting for Marissa because I think she deserves it.