The Fans are definitely getting a rude awakening on this season of Survivor, especially since the Favourites keep picking them off one by one. Â Even after last week’s tribe swap, that saw the two tribes switch tribemates, the Bikal tribe has too many Favourites and when they lost, Matt BischoffÂ was sent packing.

Castaways like Allie and Hope, who you voted about, all raved about how nice you were on the show. Do you think you were too nice?
Matt:Â No, I donâ€™t think I was too nice for Survivor. I think me being honest after the tribe swap, I think I should have played that differently. I knew going into the game that my social game was going to be my strong point. I was the only one on the Fans tribe that had alliances with multiple people. Had we won challenges early on I could have decided which way to go, because I basically had relationships on both sides. But we didnâ€™t win challenges and luck screwed me in the end.

I wanted to talk to you about luck. Thereâ€™s been some media who criticized the way the teams were swapped. Did you think it was fair?
Matt: Â I think that the producers of Survivor want a great show, so I donâ€™t thereâ€™s anything fixed out there. Survivor is the real deal, it was the gnarliest thing that Iâ€™ve ever done. I smashed the egg, it ended up being purple. The other tribe had the tougher and stronger people, we were definitely the weaker tribe. I think it was the luck of the draw. 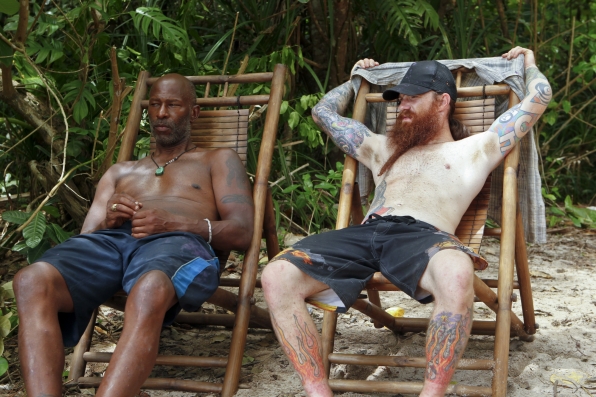 What was your first thought when you swy your new tribe?
Matt: Â At first I thought, â€œCool, Iâ€™m on a tribe with Michael and Julia, who are in my alliance.â€ Then I saw that the other tribe had all the muscle and I knew that were pretty doomed in any type of physical challenge. Itâ€™s not even close at all. It was pretty depressing.

What Favourite were you most excited to play with?
Matt: Â It was hilarious and entertaining being out there with Phillip, because watching him heâ€™s just pure comedy to me. It was really awesome playing with Dawn too. She has a heart of gold and I loved her. Likewise for Cochrane and Corrine. Everyone thinks sheâ€™s this bitch on wheels, I just think sheâ€™s witty and outspoken. It was really cool playing with them, however, at this point, I wish I had just played a normal season, because we had a disadvantage from the get-go.

When you were getting ready to go to Tribal Council, you were campaigning to get rid of Julia, who was in your alliance. Did you guys even try to get one of the Favourites to vote with you?
Matt: Â The fact of the matter is, all of the Favourites told us that they were sticking together, no matter what. We needed to win challenges, or we were going home. We knew we didnâ€™t really stand a chance. But now, having seen the show, we see that Corinne didnâ€™t like Phillip. What if we had tried to get her? But at the time, I donâ€™t think they were going to budge. I knew when we lost the challenge, it would be Michael, Julia or myself going home.

Since your such a fan of the show, if you were just watching at home, who would be rooting for to win this season?
Matt: Â Right now Iâ€™m rooting for Michael to win. I love Michael, heâ€™s a very strategic player, who is decent in challenges, I like his game. So I would to see someone like Michael win!