Survivor Exit Interview: All of Laura’s strategy comes up short!

The problem with being a Fan on Fans vs. Favourites, is that Favourites have already played before and if you’re not careful, they’ll just keep beating you at challenges. Which is exactly what happened to the Gota tribe, which lost it’s third straight challenge. This time, maybe for the first time, the Fans decided to vote strategically and get rid of the Laura Alexander, who by her own admission, was one of the tribes weakest players.

I chatted with the latest Fan to be voted off and it turns out, she’s much more strategic then you would have thought!

What was your strategy going into Survivor and how did it change once you got on the island?
I was aware that I needed to be in a majority alliance, regardless of who I was with. Because at the end of the day, thatâ€™s how the first tribal would break down. I needed to form a lot of trust to over-compensate for my weaknesses in challenges. I didnâ€™t want to have a firm strategy, I tried to be flexible going in.

Once I was out there, the one thing I didnâ€™t take into consideration was that all the people with strengths were in the minority alliance. It just sort of worked out that way.Â  Because I was one of the younger people out there, I got along with Allie and Hope and in the first couple of days, I saw myself potentially aligning with them, but the cards sort of fell a different way.

How did you come up with your strategy to divert attention away from you and towards the couples?
At the very beginning, what was important to me was that I didnâ€™t want there to be one person targeted by the entire tribe, because that would mean thatÂ  could potentially mean that I was the next vote, if I were not the first vote.Â  For instance, if we all voted Shamar off the first night, then it could have been me that went next. My goal for the first vote was to draw distinction between the two alliances, six one side and four on the other.

Were you surprised that your strategy worked so well?
I think the one night that I was surprised how well my strategy worked was the night Hope was voted off.Â Â  I had planned the potential of splitting the vote between Hope and Reynold, to flush his idol out.Â Â  But I was pretty worried about the other three votes directed towards me, and Shamar was being a loose canon. So it didnâ€™t seem very stable when we went into Tribal. Which is why you saw me go and talk to Reynold and tell him not to vote for me. I was really pulling at straws at that point and everything worked out for me that night. 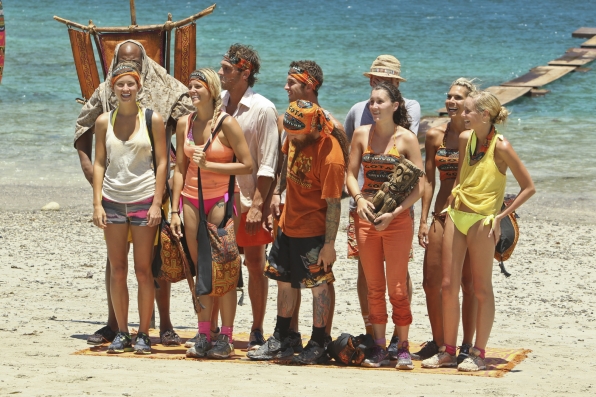 Iâ€™m actually surprised by all your strategic play, I didnâ€™t really get a sense of that during the show.
To be really strategic out there, the point is to not show that youâ€™re strategic. If I was running around talking about strategy on the beach, I would have definitely become a target.Â  I was trying to play up an image when I was out there, I never tried to come off as too smart in any way. I think if anything that draws too much attention, so I would always try and make it very conversational to my tribe mates always felt included in what ever decision was going to be reached.

The first four people to be voted off this season have been women. Is that a coincidence?
I do think itâ€™s a coincidence. In some ways, women are generally considered less physical.Â  The reason that Allie and Hope were voted off was because they were both in the minority alliance and out of the four, they were the less physical. I was also voted out based on physical reason. Although, I will completely admit Iâ€™m much less athletic than both Allie and Hope. Especially on my tribe, athleticism and physicality were a huge focus, because were losing so many challenges.